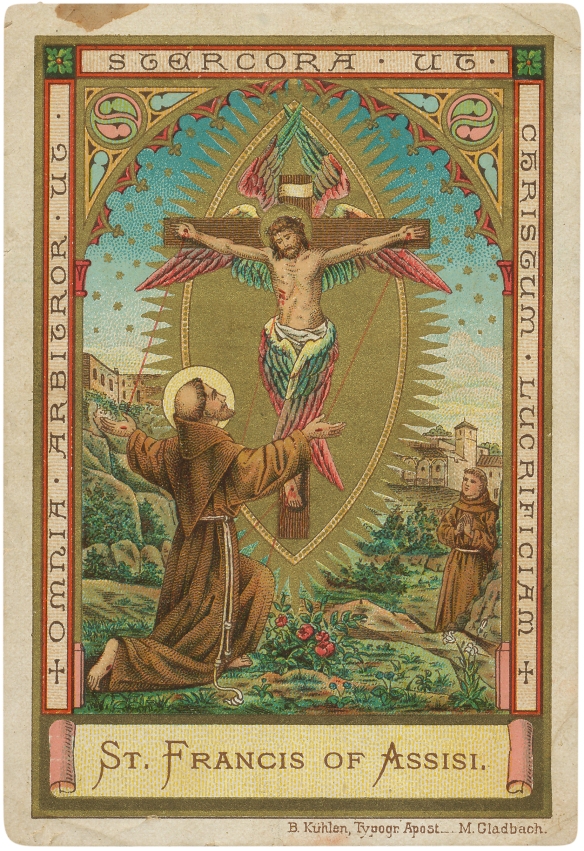 Love for God and everything in creation so consumed St. Francis of Assisi, that he was able to commune with the natural world on a divine level. Taming wolves, quieting flocks of birds and infusing peace and contentment to the humanity he interacted with, we call on Francis of Assisi to bring us into the harmonious rhythms of the universe, where all of nature and mankind are at one with the divine force of creation.

An unlikely mystic, Francis was born Giovanni Bernadone in the town of Assisi. His father, a proud member of the upper classes was a wealthy cloth merchant married to a woman from Provence. Because he frequently conversed in French with his mother, Giovanni was soon known as “Francesco” or “the Frenchman” by his friends and neighbors. Confident that his son would follow in his footsteps, the elder Bernadone indulged and catered to Francesco’s every whim and the youth enjoyed a pleasure filled existence in the company of others in his social caste. On a lark he set off with friends to take part in a war with Perugia. Much to his shock, he was taken prisoner and it took his family a year to ransom him back. Upon his return, he was bedridden and seriously ill. But in recovering his health, Francesco seems to have lost his identity. He suffered a great spiritual crisis as all interest in his old life and his father’s business waned and disappeared. While wandering the countryside he stopped into the deserted church of San Damiano and heard the crucifix say to him, “Francis, go and repair my house, which you see is falling down.” Happy to have some direction in his life, he took the request literally and began rebuilding the structure with his bare hands. Ultimately, his father disowned him and when Francis, renouncing his inheritance threw his clothing in the street, he donned the simple brown garment given him by the Bishop of Assisi.

Begging for supplies, Francis continued his work on San Damiano. Eventually he was joined by other disenchanted young men looking for a higher meaning in life. By simply following the exact tenets of Christ, this little band of friars, never owning anything, bartering labor for food and shelter began a movement of religious seekers that revolutionized the Church by the simple and loving way they spread the gospel. Instead of writing in church Latin he used colloquial Italian and in an effort to explain the story of Christ’s birth, he created a living tableau of animals and people – the first Christmas crèche.

A great poet and mystic, Francis was the first saint to receive the stigmata while in a meditative rapture. Filled with humility and though he founded one of the world’s greatest religious orders, Francis of Assisi was never ordained a priest. Upon his death he requested to be buried in the cemetery for criminals, but the people of Assisi so loved him that they took his body and interred it under the altar of their great cathedral. Just as popular with nonCatholics as Catholics, Francis has inspired great artists, composers and writers. Assisi, Italy remains a great pilgrimage site for those wishing to pay him tribute.

O Beloved Saint Francis, gentle and poor, your obedience to God, and your simple, deep love for all God’s creatures led you to the heights of heavenly perfection and turned many hearts to follow God’s will. Now in our day, in our ministry to the many who come here searching for peace and intercede for us we come before the Lord with our special requests…

O Blessed Saint of God, from your throne among the hosts of heaven, present our petitions before our faithful Lord. May your prayers on our behalf be heard and may God grant us the grace to lead good and faithful lives. Amen

Saint Francis of Assisi, pray for us. 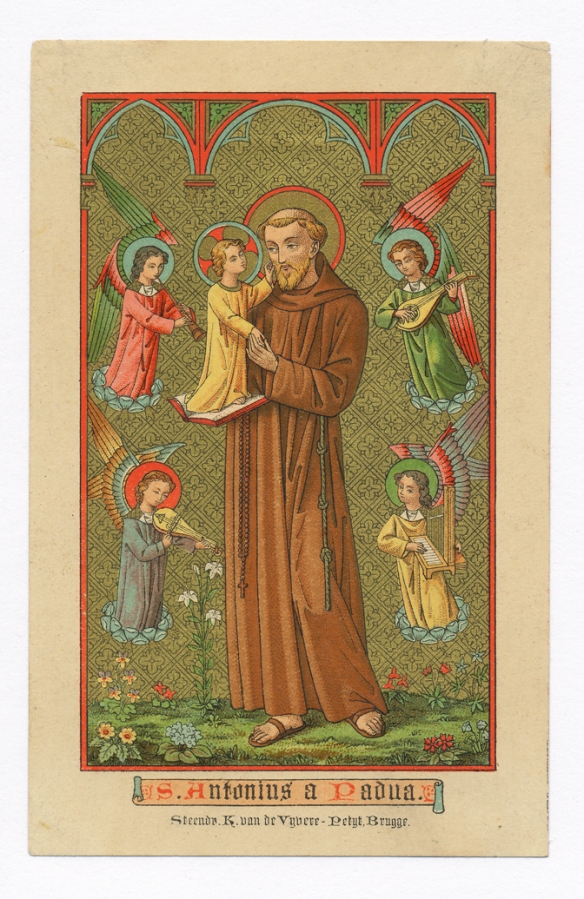 “Saint Anthony, please come around, there’s something lost that must be found.” Doctor of the Church Feast Day: June 13 Patron of: Lisbon, Portugal, Padua, amputees, barren women, domestic animals, draftees, oppressed people, orphans, paupers, the poor, pregnant women, prisoners, sailors Invoked for: finding a husband, finding lost articles Invoked against: debt, shipwreck, starvation Symbols: baby Jesus, book of Gospels, lily Wonder and miracles are infused with every story of Saint Anthony. Though he has been dead for almost 800 years, he is still the most popular saint in the world and his statue is found in every Catholic Church. Saint Anthony is best known as the patron saint of lost articles but he is invoked for help in all life situations. In his own day he was called the “Wonder Worker’ and credited with the ability to stop the rain, raise the dead and reattach severed limbs. He was such a charismatic preacher that when a crowd of heretics in Rimini refused to listen to his preaching, the fish raised themselves out of the water to hear him. Born Fernando de Bulhes in Lisbon, Portugal, he disappointed his noble family by rejecting his luxurious life and joining the Augustinian religious order. A scholar by nature, he read every book in the monastery, devoting his time to contemplative prayer. Eventually, he befriended a group of itinerant Franciscan monks and became fascinated with this new religious order. Much impressed by their dedication to simplicity, poverty and their belief in returning to the original words of Christ, he joined their ranks, changing his name to Anthony in honor of Saint Anthony of the Desert, the patron of their little church. Returning home from a failed missionary venture in Morocco, his ship was blown off course and he wound up in Messina, Sicily. A group of Franciscan friars insisted he go north with them for a great gathering of all Franciscans, with their founder Francis of Assisi. Anthony remained in Italy and discovered his great gift of preaching when a superior ordered him to speak at an ordination, telling him to say whatever the holy spirit had infused into him. He astonished his audience, not only by his skills as an orator but by the depth of his knowledge. He was sent throughout northern Italy and southern France on evangelical preaching missions which gathered crowds in the tens of thousands. His popularity among the people increased as he used his position to get real changes enacted for their protection. While based in Padua, he observed the crushing power of debt upon the common people. At Anthony’s insistence, the local municipality enacted a law protecting those who could not pay their debts that is still enforced today. Anthony exhausted himself preaching out in fields and in piazzas as there was not cathedral large enough to hold all who came to hear him. At the age of thirty six, his health began to fail him and a local Count donated a woodland retreat for his recovery. One morning the Count heard the sounds of a baby giggling and he looked out to see Anthony surrounded in light, playing with the baby Jesus. That Christ would choose to appear to one of his saints in such a vulnerable state is a testament to the loving and kind nature of Saint Anthony. Because he is depicted holding a baby, women having trouble conceiving invoke his aid. Being of Portuguese descent, Anthony’s feast day is very auspicious for marriages in Portugal and Brazil and in those cultures, he is known to assist women seeking a husband. According to legend, Saint Anthony earned the title patron saint of lost articles when a novice borrowed his psalter and failed to return it. Saint Anthony prayed to get it back and the novice was visited by terrifying visions that sent him running back to Anthony with the book. In iconography, Anthony always holds the baby Jesus and a lily for purity. Many times the returned book of the gospels is included. Novena to Saint Anthony of Padua Holy Saint Anthony, gentle and powerful in your help, Your love for God and charity for His creatures, made you worthy when on earth, to possess miraculous powers. Miracles waited on your word, which you were always ready to request for those in trouble or anxiety. Encouraged by this thought, I implore you to obtain for me (mention your request here). The answer to my prayer may require a miracle. Even so, you are the saint of miracles. Gentle and loving Saint Anthony, whose heart is ever full of human sympathy, take my petition to the Infant Savior for whom you have such a great love, and the gratitude of my heart will be ever yours. Amen It is customary to donate to Saint Anthony’s Bread, a charity started in Saint Anthony’s lifetime, in gratitude to answered novena prayers.