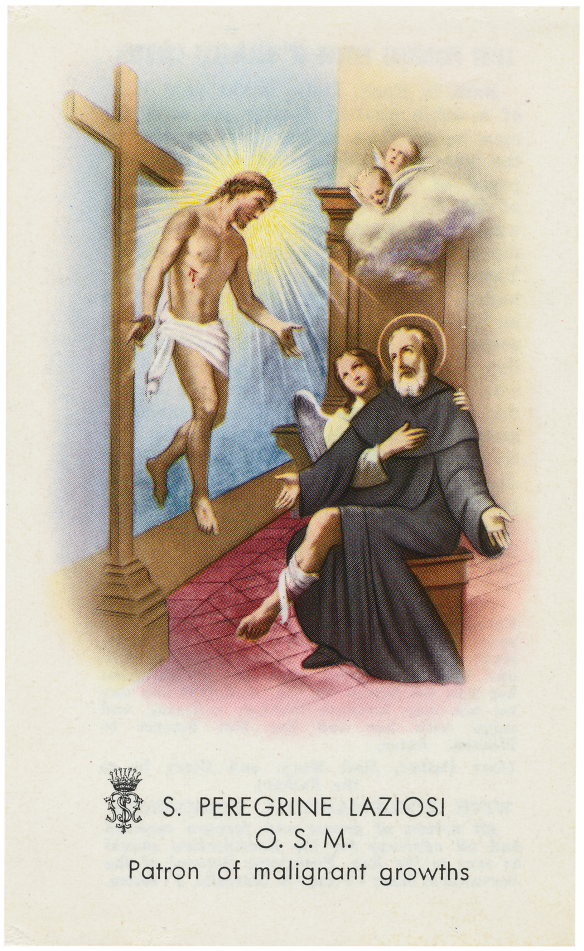 “You had recourse to the source of all grace when the power of man could do no more”
St. Peregrine 1265 – 1345
Patron of: Cancer

A victim of cancer himself, Saint Peregrine not only had to accept the reality of his illness, but also the instantaneous healing of that disease through the intercession of Christ. For this reason he is invoked for medical breakthroughs as well as for those suffering from cancer, running sores and other incurable diseases.

A wealthy young man from the town of Forli, Italy, Peregrine was a political leader of the local anti-Papist party. His rabble rousing against the power of the Pope and his early disdain for the Church makes him an unlikely saint. When a papal representative, Philip Benizi the prior general of the Servants of Mary journeyed to Forli to preach and to attempt a reconciliation between the rival political factions, Peregrine and his men broke up the crowds attending the speech. Peregrine himself slapped Benizi in the face. Instead of inciting Benizi to retaliate, he received a kindly look of forgiveness which so stunned Peregrine, that he collapsed in shame over his actions.

Since the Servants of Mary are devoted to the Blessed Mother, Benizi advised Peregrine to transform his life by cultivating a childlike devotion to Mary. While meditating in the cathedral at Forli, Peregrine had a vision of Mary instructing him to go to Siena and join the religious order of the Servants of Mary. Returning to Forli as a priest in that order, Peregrine devoted himself to the poor, the sick and the outcasts of society.

Many reported being healed during his inspirational masses. Peregrine imposed a personal penance on himself of never sitting down unless he had to. He also slept on the ground, using a stone for a pillow. After 30 years of such deprivation he developed severe varicose veins and an incurable running sore down his leg. This led to a diagnosis of cancer, the only cure possible was amputation. Resigning himself to the same fate as those he had served, Peregrine reluctantly agreed to the surgery.

Praying in the chapel on the eve of the operation he fell into a trancelike sleep where he experienced the figure of Christ getting off of the cross to touch his leg. When he awoke, there was no trace of illness in his leg and it was deemed to be completely healed. Because of this miracle, the incurably ill flocked to Forli for Peregrine’s healing prayers. Peregrine continued his mission for the next 20 years, dying at the age of 80. In modern times, many still make the pilgrimage to his tomb and there are thousands of healing societies bearing his name throughout the world.

O great Saint Peregrine, you have been called “the Mighty” and the “Wonder Worker” because of the numerous miracles you have had recourse to, for so many years you bore in your own flesh this cancerous disease that destroys the very fiber of our being, and you had recourse to the source of all grace when the power of man could do no more.

You were favored with the vision of Jesus coming down from his cross to heal your affliction. Ask of God, and our Lady the cure of these sick persons whom we entrust to you. Aided in this way by your powerful intercession, we shall sing to God, now and for all eternity, a song of gratitude for his great goodness and mercy.

Saint Peregrine, pray for me and for all who invoke your aid. Amen