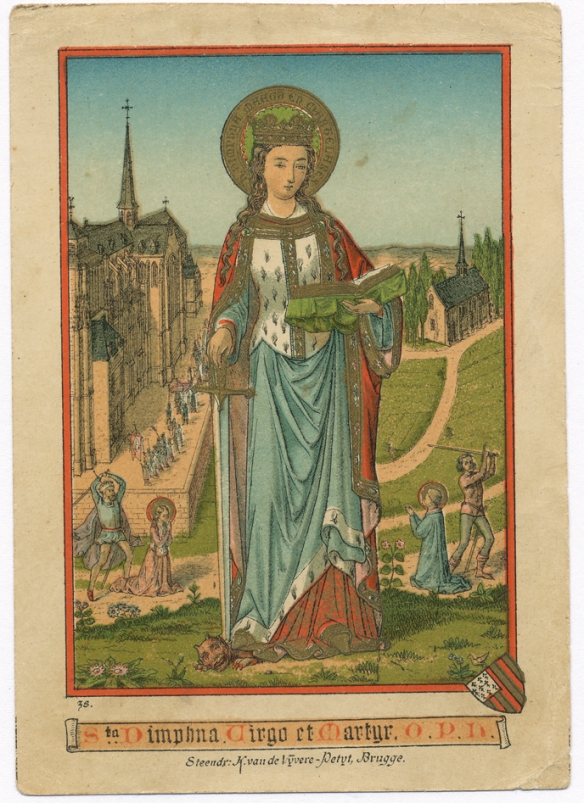 As a victim of a mentally ill father, Saint Dymphna offers much solace to those suffering from psychological problems as well as their families. She is invoked to bring peace to the unbalanced as well as create an aura of calm and consolation for those who live in the midst of instability. Having lived such a short life so long ago, there is very little factual information available about Saint Dymphna. According to a written report commissioned by the Bishop of Cambrai seven hundred years after her death, Dymphna was born an Irish princess. Her mother was a devout Christian married to Damon, a pagan king. Dymphna’s mother made sure her daughter was brought up as a Christian, having installed her own confessor, Gerebran into her household. At the age of fourteen Dymphna lost her mother and her father went mad with grief. After a period of mourning, he searched all of Ireland for a new companion but could not find a woman who even remotely resembled his first wife. Because Dymphna was almost the exact image of her mother, Damon decided to marry her and make her his queen, disregarding the fact that she was his own daughter. In order to thwart this plan, Gerebran and Dymphna escaped the castle and went abroad to Antwerp. Eventually settling in Gheel in Belgium, they lived as religious hermits. Dymphna studied to be an anchoress which was a woman who lived in a room connected to a church with a window open to the street. Towns in the middle ages usually supported these people who offered their knowledge to those in need of advice. It took Damon and his men a year to find Dymphna and Gerebran. The priest was executed immediately and Dymphna was offered her father’s kingdom in exchange for returning home with him. When she refused, he decapitated her in a rage. Both bodies were immediately buried. Since epilepsy and mental illness were all thought to be caused by demonic possession, those suffering from mental afflictions were never welcomed to live in one place and were doomed to wander from town to town. Soon after Dymphna’s death, a group of five of these social pariahs slept at the site of her murder and were instantly healed by the blood in the earth. In the 13th century, the remains of an unknown man and woman were accidentally disinterred at Gheel. The name DYMPNA was written on a brick over the woman’s remains. As the remains were reinterred in a tomb, miraculous healings of the mentally ill and epileptics in the region were recorded. Gheel became a pilgrimage site for anyone suffering from any form of mental illness. By the end of the thirteenth century a major hospital and treatment center was built there for those suffering from nervous disorders. To this day, Gheel offers the most advanced and humane treatment for the mentally ill in the world. Saint Dymphna’s remains, in the church named for her there continues to be a place of pilgrimage.