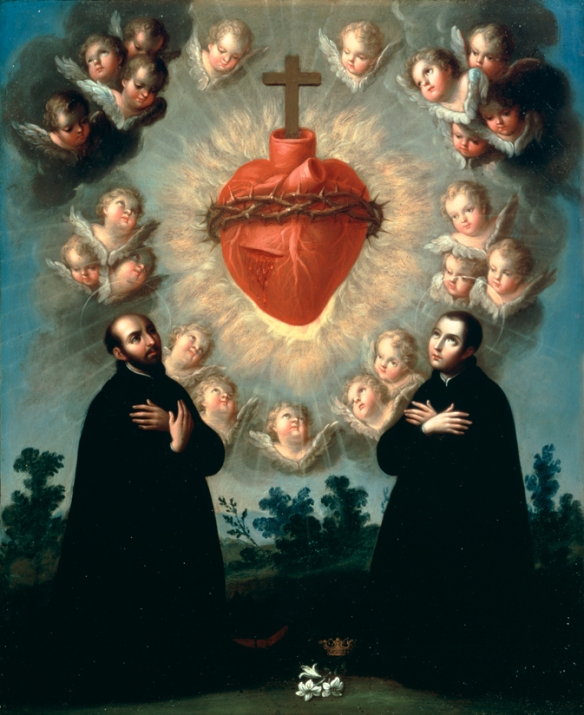 The Sacred Heart of Jesus

Devotions to the Sacred Heart of Jesus began in the seventeenth century.  Completely changing all perceptions of Christ as an image, Saint Margaret Mary’s vision of Jesus with his heart in flames, exposed and surrounded by thorns, became the predominant visual metaphor of his sacrifice and ardent love.  Devotion to the Sacred Heart promised to bring peace in the family, blessings on all undertakings, and a refuge at the hour of death. The heart is the seat of love in the body.  The wounded heart not only represents what Jesus took on for humanity at the crucifixion, but also his ongoing pain as he watches over the world. Jesus exposes his heart to all of mankind, leaving it in a vulnerable state. He asks all to call on him in a similar state of total trust.

On December 27, 1673, a young Visitation nun in Burgundy, France, named Margaret Mary Alacoque was praying in the convent chapel when she heard a strong inner voice that identified itself as Jesus Christ. Not fully trusting herself to receive a message from Christ, she began to believe in it as this voice spoke more clearly.  In subsequent visits,  Jesus explained to her that he wanted his heart honored in the form of human flesh, as it is represented in the now familiar depiction of the Sacred Heart. Christ also requested a specific devotion for honoring this aspect of his love for mankind.  Those who follow the devotion were to attend mass and take communion on the first Friday of each month for nine months in succession. In addition, one hour was to be spent on the Thursday night before the first Friday in meditation on the image of the Sacred Heart.  this was to serve as a reminder of the night Christ spent in the Garden of Gethesmane, as he contemplated his final hours on earth. As she envisioned an image of the Sacred Heart, Saint Margaret Mary heard the words, “Behold the heart which has so much loved men that it has spared nothing, even exhausting and consuming itself in testimony of its love. Instead of gratitude I receive from most only indifference, by irreverance and sacrilege and the coldness and scorn that men have for me in the sacrament of love.”

The image of the Sacred Heart of Jesus is displayed in many homes as it is believed to bring Harmony to the Family.

Novena of Confidence to the Sacred Heart of Jesus

O Lord Jesus Christ, to your most Sacred Heart I confide this intention.

Only look upon me, then do what your love inspires.

Let your Sacred Heart decide, I count on you. I trust in you. I throw myself at your mercy.

Lord Jesus, you will not fail me.

Sacred Heart of Jesus, I trust in you.

Sacred Heart of Jesus, I believe in your love for me.

Sacred Heart of Jesus, I have asked you for many favors, but I earnestly implore this one.

Take it, place it in your open heart.

When the Eternal Father looks upon it, he will see it covered with your Precious Blood.

It will no longer by my prayer, but yours, Jesus.

Sacred Heart of Jesus, I place all my trust in you.

Let me not be disappointed.

(Excerpted from the book: “Novena: The Power of Prayer” by Barbara Calamari and Sandra DuPasqua).