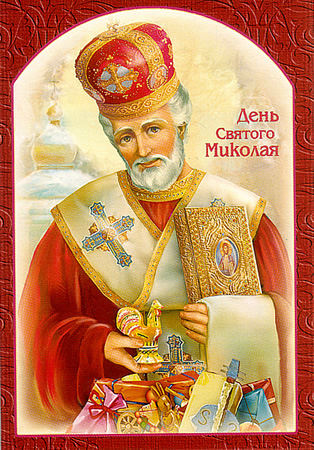 SAINT NICHOLAS OF MYRA AND OF BARI

“The West as the East acclaims and glorifies him. Wherever there are people, in the country and the town, in the villages, in the isles, in the furthest parts of the earth, his name is revered and churches are built in his honor. All Christians young and old, men and women, boys and girls, reverence his memory and call upon his protection. And his favors, which know no limit of time and continue from age to age, are poured out all over the earth; the Scythians know them, as do the Indians and the barbarians, the Africans as well as the Italians.” –Anonymous, Greece, tenth century A.D.

In the East, Saint Nicholas of Myra is one of the most revered saints, so much so that he is invoked in the Eastern Orthodox Mass. In the West, he has come to symbolize the celebration of Christmas in the form of a character named Santa Claus, or St. Nick. The traditions of Christmas reflect his life of wonders. Nicholas was born in Patara on the Western coast of present day Turkey. His wealthy parents died when he was very young, leaving their shy, devout son a fortune. His compassion for the poor led him to anonymously distribute his wealth, as in the case of his neighbor who was so desperate that he was considering selling his three daughters into prostitution. Nicholas secretly went to the man’s house on three consecutive nights, throwing in a bag of gold coins to provide a dowry for each girl. It is said that the three bags of gold landed in stockings hung to dry over the fire.  We hang stockings on Christmas Eve to remind ourselves of this compassionate act.

Compassion and care for others, regardless of their circumstances, were prevailing traits throughout Saint Nicholas’s life. On several occasions he raised people from the dead, including three young boys who had been kidnapped and murdered by a butcher. They had been dismembered and hidden in a barrel of brine.  When Nicholas learned of their fate through a dream, he miraculously raised three whole boys from the barrel and restored them to life. The butcher confessed and repented for his crime. Because of this Saint Nicholas is the patron of butchers, barrel makers and murderers. In another, a man swore on an altar of Saint Nicholas that he had repaid a debt owed to a moneylender. The court believed his oath, but on the man’s way home, he was killed in an accident on the road–the money he owed spilling out from his cane where he had hidden it. Instead of picking up the money which was rightfully his, the moneylender invoked Saint Nicholas to bring the man back to life. When the man miraculously got up from the road, the moneylender picked up his coins and became a Christian convert while the liar repented for trying to evade the payment of the loan.

In his own lifetime Nicholas was revered as a Saint, and indeed, received the bishophric of Myra under supernatural circumstance. The city’s bishop had died suddenly, and a neighboring bishop was told in a dream to make the first man who entered the church the new bishop. As fate would have it, Nicholas was visiting the city and upon his entrance at dawn, he was welcomed and consecrated as bishop of Myra. He accepted his office with grace and humility, standing fast against the persecutions of Diocletian, the Roman Emperor. Nicholas was said to be present at the Council of Nicaea in 325 A.D., where he defended the teaching of the Holy Trinity against Arius, who argued against the divinity of Christ. For his holy stance, he was thrown into prison; however, Christ and the Virgin Mary appeared to him in the prison and restored his robes and holy office. Once free he single handedly brought down the great Temple of Diana. According to legend, screaming demons fled as the building fell. Today, the day once celebrated as Diana’s birthday, December 6th, is the feast day of Saint Nicholas.

Since Myra is on the coast, there are many tales of Nicholas helping sailors at sea. He would appear to them in dreams, advising them how to steer through rough passages. “May Saint Nicholas hold the tiller,” became a common saying among sailors on the Aegean and Ionian seas. These sailors spread tales of his wonderworking in every port they entered and hundreds of seaport chapels sprung up in his name.

In these many countries customs were established to honor Saint Nicholas’s practice of anonymous generosity. The French would leave gifts and candy to poor children on December 5th, Saint Nicholas’ Eve, a practice that spread to all of Western Europe. The cult of Saint Nicholas was particularly embraced in the Netherlands. After the Reformation, when honoring saints became suspect, Martin Luther moved the customary celebration of Saint Nicholas’ Day to December 25th and changed it to a celebration of the birth of Christ. However, Saint Nicholas lived on in the common people in the guise of Sinta Klaus (Saint ‘Claus). The first Dutch settlers in New York brought their traditional celebration of Saint Nicholas with them. However, it was the German immigrants in Pennsylvania who were the first to make Christmas a major celebration. The image of Saint Nicholas driving a sled with reindeer was taken from the German myths of the gods. Odin was said to fly through the heavens the same way. In the early 1800s, visual depictions of Saint Nicholas evolved from the traditional Eastern bishop with a beard to the more modern jolly Dutch burgher. With the publication in 1823 of the poem “A Visit from St. Nicholas” (“The Night Before Christmas”) Saint Nicholas had completed his journey from the wonderworking Fourth Century saint to our present day popular figure of Santa Claus.

Since Saint Nicholas was a defender of the Holy Trinity, tales of his wonderworking frequently feature three individuals or three objects: rescuing his neighbor’s three daughters with three bags of gold (Christmas stockings, oranges or chocolate covered gold coins, the three gold balls of the pawnbroker symbolize the bags of gold). Candy canes are symbols of Saint Nicholas bishop’s staff. In art, Saint Nicholas is always depicted bearded with a bishop’s hat and staff, usually with three objects or three figures taken from the numerous tales of his wonderworking.

Almighty God, who in your love gave to your servant Nicholas of Myra a perpetual name for deeds of kindness on land and sea:

Grant, we pray, that your Church may never cease to

work for the happiness of children,

the safety of sailors,

the relief of the poor,

and the help of those tossed by tempests of doubt

through Jesus Christ our Lord,

who lives and reigns with you and the Holy Spirit,

One God, for ever and ever.

Excerpted from the book: “Saints: Ancient and Modern” by Barbara Calamari and Sandra DiPasqua