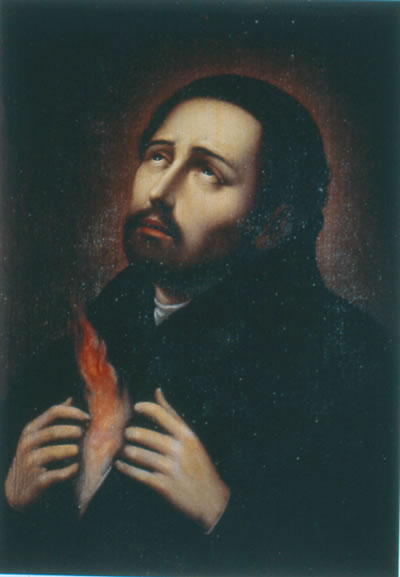 The life of Saint Francis Xavier, a brilliant intellectual who had to learn how to trust like a child, is an illustration of the power of grace. His special novena, The Miraculous Novena of Grace, is a tool for welcoming clarity and synchronicity into our lives. It helps us surrender control to a higher power. As he attained ever more grace through prayer, Saint Francis Xavier matured from being an earnest, sheltered college professor to becoming a man at home any place in the world, able to converse in any language, with people of all levels of society.

Born into a noble family in Aragon, Spain, Francis Xavier grew up in a castle, the youngest of six children. He was doted upon by his family, and his father was delighted when he showed an early ability to write well. Francis Xavier was then set upon an intellectual path and sent to the University of Paris to complete his education. There he displayed a considerable aptitude for philosophy, and it was thought he might even become one of the world famous professors at the Sorbonne. His life changed course, however, when he met an older student named Ignatius Loyola. Though he took an instant dislike to Loyola, Francis Xavier eventually joined his new order of priests, the Society of Jesus, which was devoted to spreading Christ’s message abroad. Saint Francis Xavier became one of the six original Jesuits and was sent to Goa in India, where the Portuguese had a colony. When he arrived there he realized how horribly degrading the European influence was on the native culture. Slavery, prostitution, thievery, and gambling were practiced openly. His beautifully written and voluminous collection of letters detailing his life in Goa and the degradation of the local people are still studied today. Though Francis Xavier was of noble birth, he was still able to relate to and emphasize with the lowest-born individual. He was frequently seen chatting with prostitutes, members of the underworld, and beggars in the street. He had a miraculous ability with languages and spoke various dialects of Indian with relative ease. His theory was to teach the simplest people first. Children loved him, as did prisoners and the outcasts of society, among whom he lived. As he devoted himself fully to his mission, Francis Xavier’s gifts magnified. He is credited with the ability to speak in tongues, quiet stormy seas, heal the hopelessly ill and predict the future.

Using Goa as a base, Francis Xavier went on to convert hundreds of thousands of people in the Far East. He was the first missionary to reach Japan, in 1544. It was his dream to go on to China, but he died, worn out from his ceaseless work, on the island of Chang-Chuen-Shan. He was forty-six years old. His body was put in quicklime and returned to Goa, where it is enshrined in an uncorrupt state. He is considered a protector by the Paravas, the indigenous people whom he saved from being decimated by both the Europeans and the higher-caste Indians. Not only is he the patron saint of foreign missions; but after his death, he often became the patron of newly discovered regions of the world.

The Miraculous Novena of Grace

Most amiable and most loving Saint Francis Xavier, in union with you I reverently adore the Divine Majesty. I rejoice exceedingly on account of the marvelous gifts which God bestowed upon you. I thank God for the special graces he gave you during your life on earth and for the great glory that came to you after your death. I implore you to obtain for me, through your powerful intercession, the greatest of all blessings, that of living and dying in the state of grace. I also beg of you to secure for me the special favor I ask in this novena. In asking this favor, I am fully resigned to the Divine Will. I pray and desire only to obtain that which is most conducive to the greater glory of God and the greater good of my soul.

(Here you may mention the grace, spiritual or temporal that you wish to obtain).

There are two times a year when the Miraculous Novena of Grace is considered especially powerful: from March 4 to March 12 and from November 25 to December 3.

Excerpted from the book: “Novena: The Power of Prayer” by Barbara Calamari and Sandra DiPasqua.

2 thoughts on “Miraculous Novena of Grace”