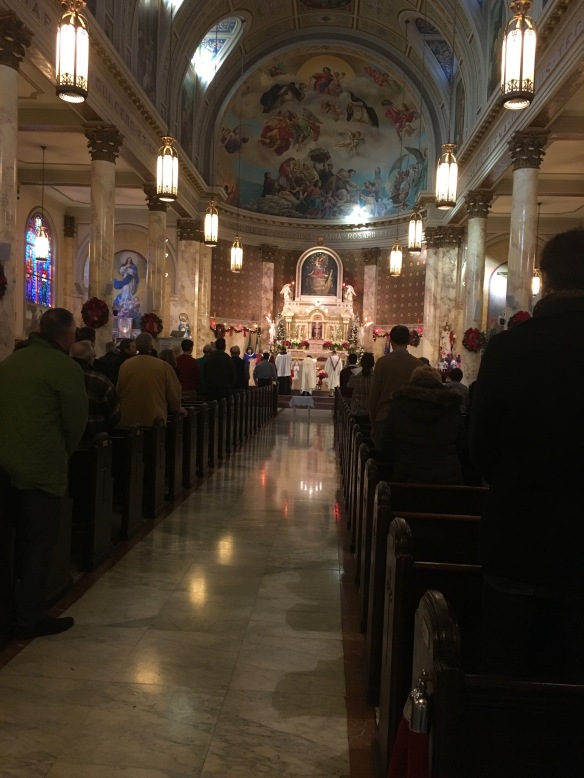 Bartolo Longo wrote about his great disappointment upon being given the miraculous painting of Our Lady of the Rosary:

Not only was it worm-eaten, but the face of the Madonna was that of a course, rough, country-woman . . . a piece of canvas was missing just above her head . . . her mantle was cracked. Nothing need be said of the hideousness of the other figures. St. Dominic looked like a street idiot. To Our Lady’s left was a Saint Rose. This I had changed later into a Saint Catherine of Siena. . . .
I hesitated whether to refuse the gift or to accept. . . . I took it.

Bought in a junk shop for less than a dollar, the painting was kept in a
convent. Its reluctant recipient had promised to bring a painting to a prayer meeting he was sponsoring in the dilapidated town of Valle di Pompei. It was so artistically inferior that he accepted it only so as not to insult the mother superior of the convent. She told him, “Take it with you, you will see that the Blessed Mother will use this painting to work many miracles.” Little did he realize the extent of transformation it would bring to the town, its residents, and the world.

Bartolo Longo was born in 1841, the child of a well-to-do family. As a law student at the University of Naples, he was swept up in the wave of anticlericalism then popular among the intelligentsia. He eventually befriended a group of Spiritualists and began attending seances. This led to his being inducted into a satanic cult where he publicly mocked and derided all aspects of the Catholic faith. The frequent fasts and gruesome rituals demanded of him as a priest of Satan weakened his physical and mental health, eventually leading to a nervous breakdown. A law professor noticed Longo’s frail physical and emotional state and aided him in his release from the grip of the occult. As his health returned, Longo was introduced to a Dominican priest trained in philosophy and theology. Eventually he was rebaptized as a Catholic, taking the middle name Maria after the Virgin Mary. The history of the Dominican order is based on Saint Dominic’s propagation of the rosary. Longo felt the repetitive rhythm of the Hail Mary in the rosary had a calming effect on his spirit and gave him a sense of well-being. He became a Dominican tertiary devoted to teaching the rosary. As a penance for his former life he chose to work in the poor and destitute town of Valle di Pompei.

Located within minutes of the ruins of the ancient city of Pompeii, the little town was founded by Christians three hundred years after the destruction of the ancient city by the cataclysmic eruption of Mount Vesuvius in a.d. 79. In the eleventh century the Benedictine order was entrusted with caring for the large and thriving church that stood within the town. A malaria epidemic all but wiped out the entire population in 1659. The large church was razed and replaced by a smaller one. The land was ceded to a Neapolitan nobleman and left in neglect. Over the years, the remaining residents were considered “superstitious and criminal, many being thieves.” When Bartolo Longo arrived to work among the people there in 1872, there was no school and no government representative, and the little church had deteriorated and was infested with rats and lizards. He went door to door to preach the importance of the rosary to
little effect. His discouragement turned to suicidal despair as he thought of his past. He wrote:

“I thought that perhaps as the priesthood of Christ is for eternity, so also the priesthood of Satan is for eternity. So, despite my repentance, I thought that I was still consecrated to Satan, and that I am still his slave and property as he awaits me in Hell. As I pondered over my condition, I experienced a deep sense of despair and almost committed suicide. Then I heard an echo in my ear of the voice of Friar Alberto repeating the words of the Blessed Virgin Mary: ‘One who propagates my Rosary shall be saved.’”

He vowed to continue his mission regardless of its apparent failure. He began prayer meetings in the church, which at first were attended only by a few
children. His restoration of the little church brought in more people, and he invited the Redemptorist Fathers to hold a two-week mission. He had
promised to display a painting of the Virgin Mary for the last evening. The only artwork available to him was the poorly executed work of art that he received from the nuns. On November 13, 1875, The Queen of the Rosary arrived in Pompeii wrapped in a sheet on top of a manure pile that was being delivered to a nearby field. The public display of the painting effected immediate changes in the little town. Three hundred families promised a penny a month in order to build a better church to house it. As soon as the cornerstone was laid for the new basilica in May 1876, miraculous healings began taking place at the shrine. In 1880 the painting was restored by the famous Neapolitan painter Federico Maldarelli (1826–1893). The basilica was completed in 1881. The community working and praying together changed the town from a depressed, dangerous, and dirty place to a thriving city. Bartolo Longo went on to found many hospices, orphanages, and devotional societies centered on the healing powers of the rosary. There are churches named after Our Lady of Pompeii all over the world.

This painting, currently on display at the Basilica of Our Lady of Pompeii attracts thousands of pilgrims a day. The image itself depicts Mary as Queen of Heaven. She sits on a throne inside a church with the Christ Child on her lap. She, in turn, becomes the physical throne for Him. The Infant Jesus is handing the rosary to Saint Dominic, the founder of the Dominican Order. Mary is handing a rosary to Saint Catherine of Siena, a Dominican tertiary who is also the patron saint of Italy. Both Saint Dominic and Saint Catherine were mystics who had visions of Mary. The Dominican Order propagates the rosary in the belief it puts one in a higher state of mind and opens one up to grace.

At Pompeii the Virgin Mary worked through the unlikely instruments of a former satanist and a discarded painting. The transformation of the neglected town of Pompeii and its people have inspired all who visit the basilica or read its story.