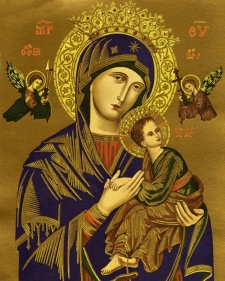 Our Lady of Perpetual Help is the patroness of Haiti and Italy.

The feast day of Our Lady of Perpetual Help is June 27.

Icons are visual prayers. Artists who painted them were usually monks who spent whole days in contemplation, meditating on the mysteries of God. In the East, icons not only serve as instructive visual stories but because of the spiritual atmosphere in which they are channeled, they are also venerated along with the word of God. Our Lady of Perpetual Help is an icon whose style bridges both Eastern and Western Churches. Its subject is called the Virgin of the Passion, because it deals with Mary’s role in the Crucifixion of Christ. Like most of these works, the artist is anonymous but most likely came out of the Andrea Rizo de Candia (1422–1499) school of Crete. This mesmerizing picture, which spent years in anonymity, is now venerated and honored in all corners of the world and enjoys universal devotion.

Written remembrances of the image date back to the 1400s, when it was venerated in a church on the island of Crete as The Miraculous Picture of the Mother of God. In the late 1490s, a local merchant aware of all the wondrous stories surrounding the icon, stole it and took it with him to Rome. During the voyage over, a violent storm terrified the crew. Aware that the merchant was traveling with the painting, they had him take it out for them to pray in front of. They attributed their safe crossing to the intercession of the Virgin in the picture. While in Rome, the merchant became mortally ill. Repenting of his theft, he asked the friend he was staying with to promise to see that the painting was given to a church. The friend agreed and took the painting upon the merchant’s death. However, the man’s wife was so charmed by the image, she hung it in her bedroom and the merchant’s request was never honored. Mary appeared twice to the family’s six-year-old daughter, and it was in these visions that she first announced herself as Our Lady of Perpetual Help. She asked that the family stop hoarding the picture and give it to a church that was located between Santa Maria Maggiore and San Giovanni in Laterano. After consulting with a priest, the family gave the painting to the Church of San Matteo, an obscure, out-of-the-way parish. It was installed on March 27, 1499. Almost immediately, pilgrims from all walks of life came to seek comfort in contemplation in front of the icon. For the next three hundred years, the painting known as The Madonna di San Matteo, remained undisturbed as it acquired a loyal group of devotees. In 1798, Napoléon’s troops conquered Rome, and San Matteo was one of the thirty churches destroyed by the French army. The Irish Augustinian monks who were in charge of the church brought the icon to the Monastery of Saint Mary in Posterula in the Trastevere section of Rome and placed it in a private chapel. Its existence was all but forgotten as the original band of monks from San Matteo were dispersed to Ireland and America.

Michael Marchi, an altar boy who served Mass at Saint Mary in Posterula remembered one of the last of the old monks: “This good brother used to tell me with a certain air of mystery and anxiety, especially during the years 1850 and 1851, these precise words, ‘Make sure you know, my son, that the image of the Virgin of Saint Matthew is upstairs in the chapel; don’t ever forget it . . . do you understand? It is a miraculous picture.’ At that time the brother was almost totally blind.”

Michael Marchi entered into religious life, taking orders in the Redemptorist Missionaries. In 1855 they purchased Villa Caserta in Rome to house their order. What they did not realize was, that this estate had been built over the ruins of the Monastery and Church of San Matteo. An investigation into the history of the property turned up writings about an ancient icon of the Mother of God that had enjoyed “great veneration and fame for its miracles,” which was once housed in San Matteo. In 1863 a famous Jesuit preacher came and gave a sermon about the now lost icon of The Virgin of Perpetual Help. Father Marchi realized this was the same dust-laden picture he had always seen above the altar of the house chapel of the Augustinian Fathers at Saint Mary in Posterula.

“There was no devotion to it, no decorations, not even a lamp to acknowledge its presence . . . it remained covered with dust and practically abandoned, many were the times when I served Mass there, that I would stare at it with great attention.”

This providential discovery came to the attention of Pope Pius IX, who remembered praying before the image in San Matteo as a boy. He ordered that the icon of Our Lady of Perpetual Help be brought to the new church of Saint Alfonso for public veneration. Situated on the Esquiline Hill, this is the exact location, between the two basilicas of Santa Maria Maggiore and San Giovanni in Laterano, that the Virgin Mary had originally requested for it to be placed. Pilgrims come from all over the world to be in the presence of the icon.

The pope did not give the Redemptorists the icon just to keep in their church for visiting pilgrims, but rather to make it their mission to disseminate this image of Mary throughout the world. Copies of this icon are considered just as capable of working miracles as the original. Shrines and legions of devotees to Our Lady of Perpetual Help can be found in the United States, Haiti, Ecuador, Peru, Suriname, Chile, Brazil, Mexico, Ireland, Italy, Poland, France, Spain, Singapore, and the Philippines.

Mary is the largest figure in this icon, but the focal point or center of the picture is her hand being clutched by her Son’s. Jesus is a young boy who has just run to his mother in such a fright that one of His sandals is dangling off his feet. Mary calmly shields Him, confident of her power to protect and comfort Him. On either side of them are the objects of the Child’s fear. The archangels Gabriel and Michael have revealed to Him the Cross, the spear, and the sponge, foreshadowing his future torment and execution. Since the birth of her Son, Mary knew He was destined to suffer and die for humankind, yet she firmly believed in His redemption. Therefore, she was able to calm the Child Jesus in this moment of anxiety. If God Himself can reach out to Mary for refuge, then anyone is able to approach her, no matter what we fear, our future or our past actions. Regardless how we judge ourselves, she has total belief and faith in us. Greek letters on either side of Mary’s head are abbreviations for the title, “Mother of God.” Beside the head of Jesus are the Greek letters for “Jesus Christ.” It is important to note that Mary is not holding Jesus’s hand in a tight grip but she leaves it open in invitation to the viewer to join them. Jesus has his hand palm turned down into His mother’s. This symbolizes the grace and favors that He distributes through her intercession. Mary looks directly at the viewer, offering love and comfort to all who gaze at the image.

It is said that Our Lady of Perpetual Help never refuses a request, no matter how small or frivolous it may seem. Many who have felt unworthy to call on her in their direst need report hearing a calm voice saying, “Why don’t you just ask?”