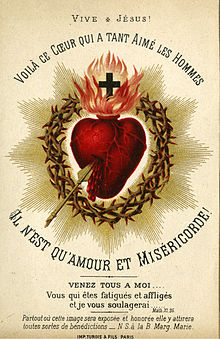 Feast Day: Movable – the Friday after the Second Sunday after Pentecost

Quote: “Behold the heart which has so much loved men that it has spared nothing, even exhausting and consuming itself in testimony of its love….”

The iconography of the Sacred Heart speaks to us on such a basic level that its image can be found everywhere in everyday life – from tattoos on bikers to stained glass windows in cathedrals. Traditionally, many Catholic homes display the Sacred Heart of Jesus to insure domestic peace and a loving atmosphere. This ancient concept depicting Christ’s heart in flames was first meditated on in privacy by the 4th century hermits in the desert and taken up by mystics in religious communities in the 11th and 12th centuries; it did not become a popular devotion until the 17th century.

On December 27, 1673, a young Visitation nun in Burgundy, France, named Margaret Mary Alacoque was praying in the convent chapel when she heard a strong inner voice identifying itself as Jesus Christ. In later visits the voice requested that she begin a devotion to an image of Christ’s heart in flames, bleeding and encircled by thorns. The flames were for His ardent love for mankind, the thorns were to remind us of His sacrifice on the cross and the blood was because He was God made man. There is no indication that Margaret Mary Alacoque had ever seen this image before. Indeed, she was puzzled by it and greatly mistrusted herself as being qualified to relay any spiritual messages no matter who they purportedly came from. When she reported her communications to her Mother Superior she was scoffed at as delusional and forbidden to perform any of the devotions she was instructed to carry out. It was only after her Confessor, Claude de La Columbiere heard her describe her visions that she was taken seriously. Unlike the Mother Superior or Margaret Mary, he was well aware of the private devotions of Bernard of Clairvaux and Mechtilde of Helfta, religious mystics who lived centuries before, inspired by same image. La Columbiere did much to publicize devotion to the Sacred Heart based on the messages Christ gave to Margaret Mary. According to her, Christ was greatly troubled by the indifference and sacrilege He was being treated with by the average person. As a reward for contemplating this image He promised:
1. I will give them all the graces necessary for their state of life.
2. I will give peace in their families.
3. I will console them in all their troubles.
4. I will be their refuge in life and especially in death.
5. I will abundantly bless all their undertakings.
6. Sinners shall find in my Heart the source and infinite ocean of mercy.
7. Tepid souls shall become fervent.
8. Fervent souls shall rise speedily to great perfection.
9. I will bless those places wherein the image of My Sacred Heart shall be exposed and venerated.
10. I will give to priests the power to touch the most hardened hearts.
11. Persons who propagate this devotion shall have their names eternally written in my Heart.
12. In the excess of the mercy of my Heart, I promise you that my all powerful love will grant to all those who will receive Communion on the First Fridays, for nine consecutive months, the grace of final repentance: they will not die in my displeasure, nor without receiving the sacraments; and my Heart will be their secure refuge in that last hour.
Since there is no way to physically depict the soul, it is thought that the image of the Sacred Heart comes closest. The heart is the seat of love in the body and the wounded heart represents Christ’s sacrifice at the crucifixion as well as His ongoing pain at the state of mankind.

excerpted from the novena app

read more on the sacred heart of jesus in the book: ‘Novena the power of prayer’