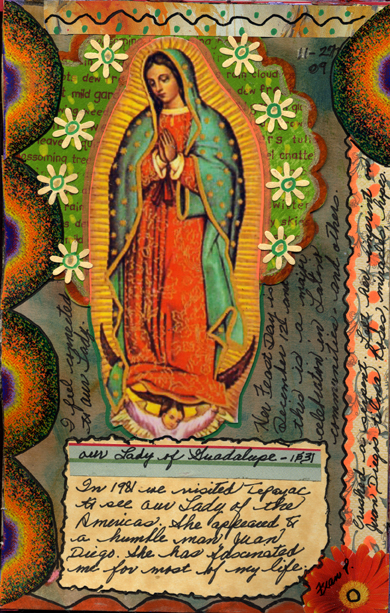 This image of Mary is the preeminent cultural icon of Mexico and the American Southwest, cherished by Catholics and non-Catholics alike. Unlike other apparitions of Mary, where she sometimes issues warnings to mankind, in her visitation to the Aztec people, she promised hope, love and comfort at a time when their own way of life had been destroyed. We invoke Our Lady of Guadalupe anytime we need the wisdom and comfort of a motherly force. In December of 1531, the world of the once great Aztec civilization lay in ruins.

The native inhabitants of what would become Mexico City were suffering brutally under the domination of Spanish Colonialists who had first invaded in 1519. Within two short years the forces of Hernan Cortes, with the help of native enemies of the Aztecs had completely overrun and destroyed a dual culture of light and dark, one of gracious cities and blood filled temples. Believing that their superiority and way of life depended on feeding their gods human sacrifices, the Aztecs routinely invaded neighboring tribes, sacrificing tens of thousands of captives a week. Gradually, the images of their own gods, particularly the female ones, took on more monstrous and grotesque features.

The Spanish responded to these sacred sites by wreaking havoc and destruction upon them. Within ten years the remaining Aztec residents were heart-sick, depressed and dying off. On December 9, 1531, and Aztec convert to Catholicism called Juan Diego, was on his way to mass. Distracted by the singing of birds on a hillside, he stopped. He then heard the kindly calling of his name in his native Nahuatl language. He approached the noble Aztec woman n the hill and was stunned at the heightened glow of her surroundings. She introduced herself as the perfect maiden Saint Mary, honorable mother of the true God. She asked him to go to the bishop and request a temple be built to her on the hill.

She added, “I am the compassionate mother of you and your people, here in this land and of all the people who love me, search for me and confide in me…” After a long wait, the bishop told Juan Diego that he needed a sign proving that this was a true appearance of Mary. In subsequent days, when Juan Diego again saw the woman on the hill, he begged her to get someone who the bishop would respect more to deliver her request.

She kindly replied that he was the perfect one for her message. The next day Juan Diego walked another way into town in order to avoid the woman as his uncle was sick and he did not want to waste any time doing her errands. Nonplussed, she came down from the other side of the hill to meet him. Flustered, he told her he had to tend to his uncle and had no time to wait for the bishop who did not believe him anyway. The woman assured him that his uncle was already well and then told him to gather roses among the rocks. This being winter he was amazed at how many roses were in full bloom. The woman arranged the roses in his cloak and again sent him off to the bishop. When he was finally granted this audience, it was the bishop’s turn to gasp in amazement. As Juan Diego unwrapped his cloak of roses, there imprinted on his cloak was the exact image of the lady on the hill.

The bishop fell to his knees and begged Juan’s forgiveness. Today, tens of millions of pilgrims flock to Mexico City to see this original cloth which is in the cathedral named after this apparition of Mary, Our Lady of Guadalupe. The Virgin Mary appears to each visionary as a member of their own culture. This image of a kindly, loving mother figure so impressed the native people of Mexico, that thousands of them came to be baptized within the first few months of the cloth being put on display.

Our Lady of Guadalupe, according to your message in Mexico I venerate you as “the Virgin Mother Of the true God for whom we live, the Creator of all the world, maker of heaven and earth.” In spirit I kneel before your most holy image which you miraculously imprinted upon the cloak of the Indian Juan Diego. And with the faith of the countless numbers of pilgrims who visit your shrine, I beg you for this favor: (mention your request).

Remember, O Immaculate Virgin, the words you spoke to your devout client, “I am a merciful Mother to you and to all your people who love me and trust in me and invoke my help. I listen to their lamentations and solace all their sorrows and their sufferings.” I beg you to be a merciful Mother to me, because I sincerely love you and trust in you and invoke your help. I entreat you, Our Lady of Guadalupe, to grant my request, if this should be the will of God, in order that I may bear witness to your love, your compassion, your help and protection. Do not forsake me in my needs.

Our Lady of Guadalupe, pray for us.

1 thought on “Our Lady of Guadalupe”