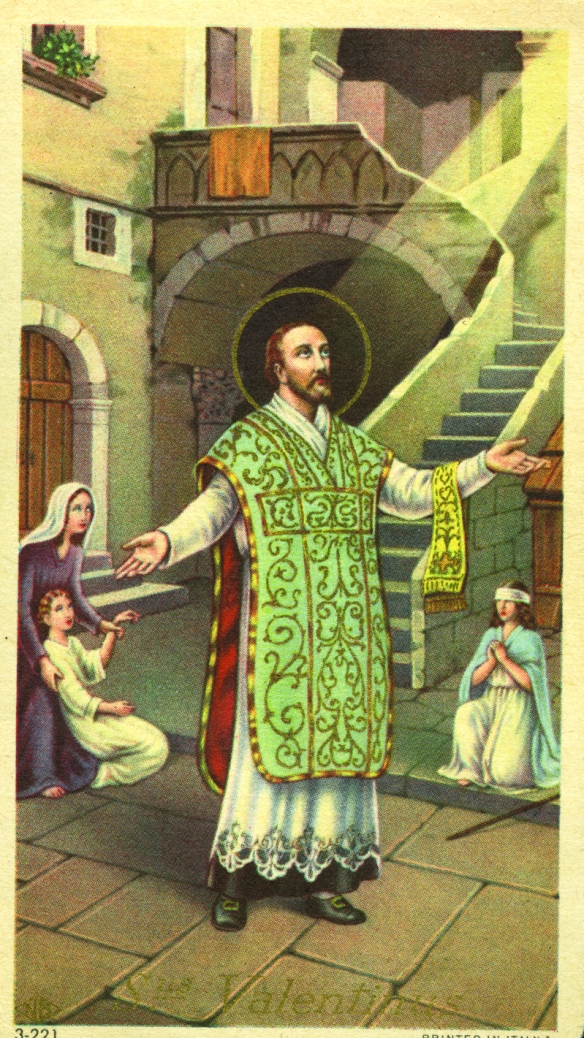 His feast day is embedded in Western civilization. His name has become synonymous with a certain type of romantic card, yet few realize that Valentine actually existed. As a saint, his first great work was to unite young couples in marriage. In the year a.d. 269, when the Roman Empire was under constant attack from barbarian tribes, Emperor Marcus Aurelius Claudius issued an edict outlawing marriage for young men. He speculated that more soldiers would join the legions to defend it if they were unfettered by wives and children. Valentine was a respected healer and priest in the outlawed Christian faith. He had great sympathy for those young couples whose plans for a life together were shattered by the state and he encouraged anyone who wished to wed to come to him to be married in secret. He was arrested and imprisoned in Rome for defying the emperor. But his reputation as a learned man remained untarnished and many of his followers would visit him in prison for counseling; others came for health cures.

Personally afflicted with epilepsy, Valentine was particularly drawn to treating those also suffering from the disease. The jailer, having witnessed many successful healings at Valentine’s cell door, asked the saint to treat his daughter, who had been blind since birth. During her subsequent visits to the prison, Valentine read to the girl, taught her mathematics, and beautifully described the natural world. Valentine’s wisdom and kindness so impressed the jailer and his family that they converted to Christianity despite the fact that the young girl remained blind. This conversion established Valentine’s status as a true threat to the state, a charge punishable by death. His execution came on February 14, the eve of the Roman festival of Lupercalia. Valentine was beaten with clubs and then beheaded. Before his sentence was carried out however, he sent a yellow crocus to the jailer’s daughter enclosed with a note that read, “With love, from your Valentine.” The bright color of this flower was the first thing she ever saw, her eyesight having been miraculously restored. She is said to have planted an almond tree on Valentine’s grave, and to this day the almond tree is considered a symbol of friendship and devotion. Valentine was buried on the Flaminian Way in a catacomb that still bears his name. A church was dedicated to him there in a.d. 496. The wall of the city, the original Flaminian Gate, was a pilgrim’s first stop upon entering Rome and was known as Porta S. Valentino until the seventeenth century, when it was renamed Porta del Popolo. In the ninth century, relics of the early martyrs were removed from the catacombs and transferred to local Roman churches. Valentine, too, was reinterred in the church. His body was moved to the church of Saint Praxedes, very near his original burial place. Many cities besides Rome claim his relics, among them Terni, Italy; Madrid, Spain; Dublin, Ireland; Glasgow, Scotland; and Rocamador, France.

It is no coincidence that the liturgical feast day of the patron saint of love falls on the eve of Lupercalia, an erotic Roman fertility festival. It was common practice for church holidays to coopt pagan celebrations. The Romans considered this the official beginning of Spring, a time of reawakening fertility and warming weather. One of the activities held in honor of the goddess Februata Juno consisted of the city’s bachelors drawing the names of unmarried women out of an urn. They would then become a couple for the rest of the year, with many of these matches resulting in marriage. In twelfth century southern France, this practice was reawakened as part of the Langue d’Oc poetry movement. This was a time when art and literature took on a heightened importance to the ruling classes. Noble youths known as gallants wrote missives of love they called galantines. The local pronunciation confused this with the word valentine and Valentines clubs sprang up.

On February 14, after a Mass in honor of Love, a silver casket containing the names of unmarried local men was presented to the single women in town. The men whose names each woman drew was required to be the guardian of that lady, providing her with flowers, poems, and gifts throughout the year. He was to guard her honor chivalrously. Marriage between these Valentines was strictly forbidden. Because of the wide dispersal of his remains, the cult of Saint Valentine became extremely popular in Northern Italy, southern France, and England. His head, which was reputed to be in England, was said to bestow incredible miracles and healings on those who kissed it. Since the middle of February was considered the time of year when birds began to pair, the English, like the Romans a thousand years before them, looked upon this as the beginning of mating season. Celebrating the Feast of Saint Valentine by citing the fidelity of doves seems to be an English tradition.

The oldest valentine note in existence today was written by Charles, Duke of Orleans, to his wife in 1415, while he was imprisoned in the tower of London. By the middle, nineteenth century sending and receiving anonymous Valentine’s cards and poems declaring one’s love became common in both America and England. By then, the story of the saint who had inspired this industry might have faded away, but his name and feast day is celebrated universally.

O glorious advocate and protector, Saint Valentine, look with pity upon our wants, hear our requests, attend to our prayers, relieve by your intercession the miseries under which we labor, and obtain for us the divine blessing, that we may be found worthy to join you in praising the Almighty for all eternity; through the merits of Our Lord Jesus Christ. Amen.