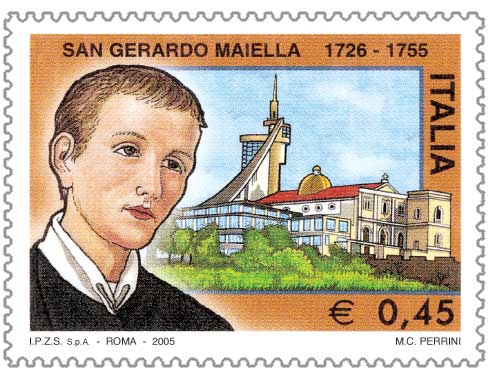 Quote: “Who except God can give you peace? Has the world ever been able to satisfy the heart?”

A quiet and humble lay brother in the newly found Redemptorist order, St. Gerard Majella did not display his great mystical gifts until the last three years of his life. Before his early death at the age of twenty-nine, he was known as “The Wonderworker of the Eighteenth Century”, for his ability to read consciences, predict the future, be in two places at once, heal the dying and infuse his surroundings with serenity. He is most invoked by women who want to conceive a child and though there are many different novenas to him, The Prayer for Motherhood is particularly popular throughout the world.

Born in a town south of Naples to a tailor and his wife, Gerard was a sickly child, contemplative by nature. At the age of twelve, his father died, plunging his family into poverty. Gerard was apprenticed to a tailor in order to support his mother and three sisters.  He suffered brutally at the hands of this abusive man and eventually got a job as a servant for the local bishop. His hopes of entering the Capuchin order were dashed due to his poor health. Upon returning home, his devout nature and his kindness, especially to children, was noticed by St. Alphonsus Liguori, the founder of the Redemptorist order. He invited Gerard to join as a lay brother and work in the slums among the poor. It was while he was serving on this mission that Gerard faced the greatest challenge of his life. A young woman accused him of fathering her unborn child. When Gerard refused to comment on these charges or defend himself, the Redemptorists had no choice but to deprive him of the privilege of working with them. Months later when the woman admitted that she had lied, a bewildered Alphonse Liguori asked Gerard why he had remained silent. He answered that he had complete faith in God and that silence was the only answer to unjust accusations.

Raised as the only male in a household of women, St. Gerard was particularly sensitive to the problems women had in conceiving and giving birth. While visiting family friends, he dropped his handkerchief while leaving. The young woman of the family ran to give it to him and he refused to take it saying, “Keep it. One day it will be of service to you.” Though puzzled, she did as he said. Years later, while dying in childbirth she remembered his words and had the handkerchief brought to her and placed on her womb. All deadly complications stopped and she gave birth to a healthy baby. The handkerchief of St. Gerard’s was passed from mother to mother until his canonization in 1904. The remaining shred is still used to bless relics for those seeking to conceive a child or have a safe delivery.

Skull: contemplative, the sign of one who knows that this life is temporary.

Crucifix: devotion to Christ and willing to suffer

Novena Prayer for to St. Gerard Majella for Motherhood

O good St Gerard, powerful intercessor before God and wonder worker of our day, confidently I call upon you and seek your aid.  On Earth you always fulfilled God’s designs, help me now to do the holy will of God.  Implore the Master of Life, from whom all paternity proceeds, to render me fruitful in offspring, that I may raise up children to God in this life, and in the world to come, heirs to the Kingdom of His Glory.
Amen.

Excerpted from The Novena App