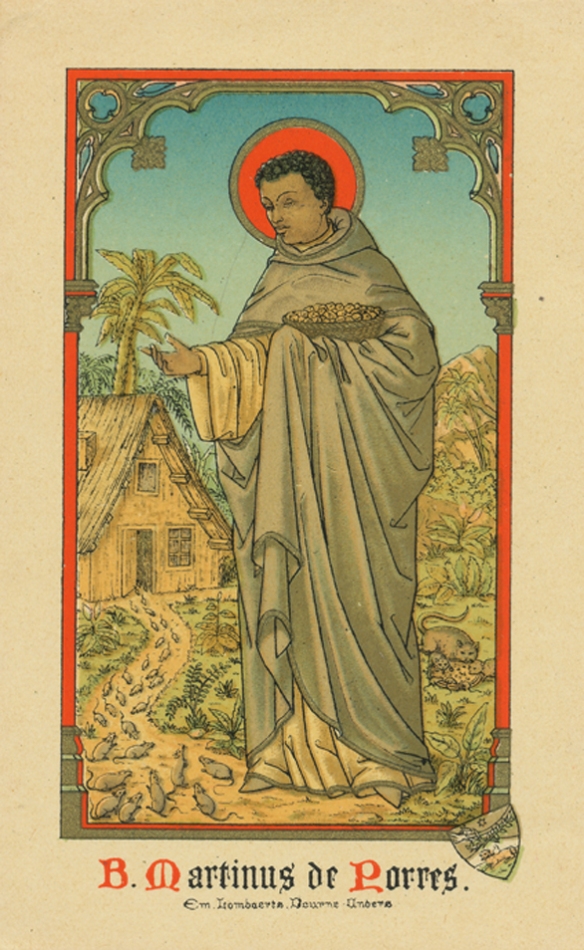 Born in Peru, with a Spanish noble fatherand an African freed slave mother, St. Martin de Porres is one of the most popular saints in the New World. A great healer, he was so in tune with the innate rhythms of nature, he could read minds, heal any sickness, communicate with animals and even levitate. Being a person of mixed race he is called on to quell racial tensions, but his patronage extends to bringing harmony to all situations and he is invoked to heal both physical and spiritual wounds.

Martin and sister had a poor and difficult childhood, as people of mixed race were reviled. At the age of twelve Martin was apprenticed to a barber. 17th Century barbers did more than just cut hair, they also performed medical procedures, made medicines and prescribed treatments for every ailment. A naturally devout boy, Martin meditated on Christ’s passion as he mixed his herbs and it is said he healed as many people with his prayers as with his potions. By the time he was eighteen, Martin had a very successful practice. People from all walks of life sought his abilities. Instead of pursuing a lucrative career in town, Martin joined the local Dominican Convent as a Lay Brother, secretly wishing to become a foreign missionary.

While the monastery was founded to tend to Spanish nationals working in Peru, Martin taught his European brethren the true meaning of Christian charity when helping out in the infirmary during a plague. He cared for nobility, slaves, soldiers, merchants and natives with the same respect. The incredible success of his treatments made his superiors install him as the head of the infirmary. Knowing Lima and its citizens as a native of that city made him a very effective fundraiser for the monastery. His superiors gave him full autonomy on dispersing whatever monies he raised to the poor. Every day at noon he opened the doors of the monastery distributing food to whoever needed it. To Martin all creatures in creation were equally loved and he inaugurated the first shelters for stray cats and dogs. When the monastery was overrun by rodents, his superiors ordered poison to be set out. Instead, Martin went out to the garden and called the rodents out their hiding places. He promised to feed them, if they promised to stay out of the building. Both sides kept to their agreement, and Martin has been invoked ever since, to prevent mice and rat infestation. Martin used menial labor as a time of prayer and communion with God. He developed deep wisdom from this form of mediation and Archbishops, city officials and students came to him for spiritual guidance. Because of this he is the patron of jurists.

Saint Martin de Porres, your concern and charity embraced not only your needy brethren, but also the animals of the field. You are a splendid example of charity; we thank and praise you. From above, hear the requests of your needy brethren. (mention your request here). By modeling our lives after yours, and imitating your virtues, may we live content knowing that God has looked favorably upon us. Because this is so, we can accept our burdens with strength and courage in order to follow in the footsteps of our Lord and the Blessed Mother. May we reach the Kingdom of Heaven through the intercession of our Lord Jesus Christ. Amen.