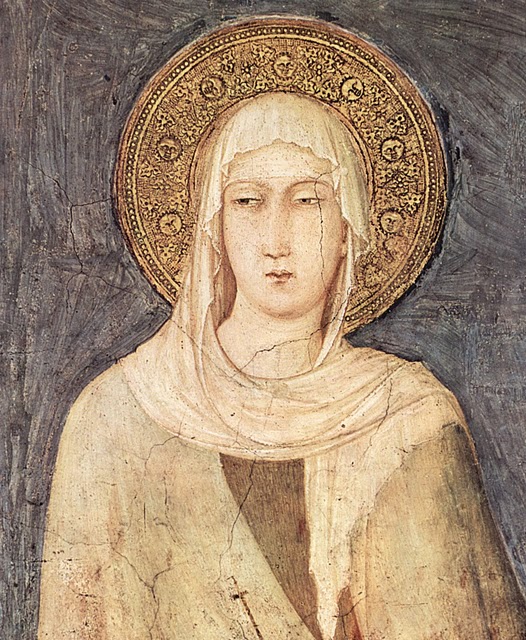 Abbess and Founder of the Poor Clares

Quote: “Totally love Him, Who gave Himself totally for your love.”

Together with her mentor and friend, Francis of Assisi, St. Clare shook the foundations of Medieval society by revolutionizing religious expression. Her given name, Chiara means clarity and we call on St. Clare whenever we need to shine a light on a situation or to find a way to communicate more clearly. She is also invoked to protect the blind and to help those with eye trouble.

St.Clare was named the patron saint of television writers and workers due to a vision she had while too ill to attend Christmas Eve mass. She was able to view and hear the entire mass on the wall of her room. She spent much time embroidering linens for use in mass, so she is the patron of embroiderers. Because that trade is hard on the eyes and because of her name, she is the patron of those with eye problems and the blind.

Symbols: monstrance or a lamp

O Glorious St. Clare! God has given you the power of working miracles continually, and the favor of answering the prayers of those who invoke your assistance in misfortune, anxiety, and distress. We beseech you, obtain from Jesus through Mary His Blessed Mother, what we beg of you so fervently and hopefully, (mention your petition) if it be for the greater honor and glory of God and for the good of our souls.   Amen.

1 thought on “Novena for August”