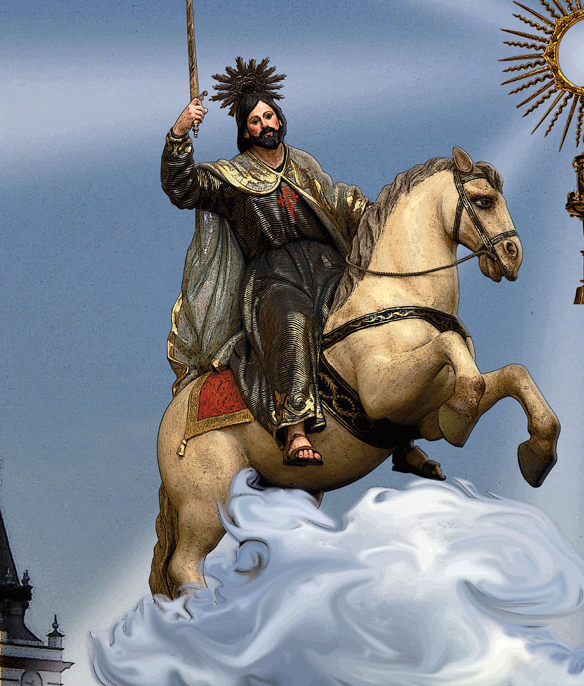 The Feast of Santiago

The feast day of Santiago, or St. James the Greater, the patron Saint of Spain is celebrated on July 25th with a pilgrimage to Santiago de Compostela, the holy sight in Galicia, Spain where the Saint’s remains are said to be buried.

One of the original twelve apostles,  St. James was sent to Iberia as an evangelist. Upon his return to Jeruslaem, he was killed by Herod Agrippa the First. His disciples then carried his body by sea to back Iberia, where they landed at Padron, on the coast of Galicia, and then took his remains inland for burial at Santiago de Compostela. Due to his return to Spain by sea, his symbol has always been the cockle or scallop shell and pilgrims often wear this symbol on their hats or clothes.

Coquille St. Jacques, ‘cockle of Saint James’ is a popular French dish in honor of the Saint. It’s a dish of broiled scallops served in their shell, often topped with a béchamel sauce and a little Gruyere. It’s very popular in bistros throughout France, but since Santiago’s holy sight is in Galicia I thought a dish from that region would be a more fitting tribute to this popular Saint. In Galicia the local scallop is called vierias, the pilgrim’s scallop, in honor of Saint James. They’re eaten broiled in their large shells with garlic, parsley and sherry or white Albarino wine. Since scallops with their shells still intact are hard to find in the U.S., I’ve chosen a cockle recipe instead. The tiny New Zealand cockles you find in many American fish shops are perfect for this.

Cockles with Spanish Sherry and Almonds

(Serves four as a first course)

2 pounds cockles, well washed (discard any that are opened)

The leaves from 8 thyme sprigs

In a large pot, heat about 2 tablespoons of olive oil over medium flame. Add the garlic and let it turn very lightly golden. Add the cockles, the paprika, and a little salt. Give the cockles a quick stir and then add the sherry and the bay leaf. Cook, uncovered, stirring frequently until the cockles have opened, about 4 minutes or so. Add the thyme and stir it in.

Pour the cockles, with all their cooking juices into a large serving bowl. Give them a generous drizzle of fresh olive oil and garnish with the toasted almonds and the parsley leaves.

Serve with crusty bread and glasses of white Spanish wine such as an Albarino from Galicia.

Dining with the Saints, written by Erica De Mane, is a monthly feature on novena.co. If you like, you can also check out http://www.ericademane.com, her blog on Southern Italian cooking.