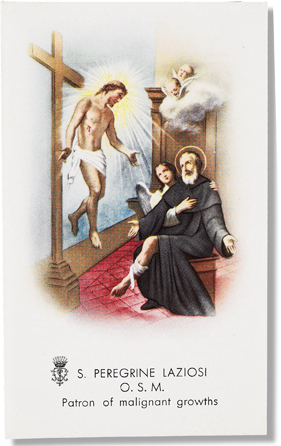 An antipapist political leader, Peregrine converted to Catholicism after his violence against the papal legate was rebuffed with kindness. He eventually became a popular preacher, dedicating himself to working with the hopelessly ill. He himself was diagnosed with cancer. The night before he was to have his leg amputated, Christ came to him and healed him in his cell.

The above patron saints are excerpted from the book Patron Saints: A Feast of Holy Cards by Barbara Calamari & Sandra DiPasqua

All images are from the collection of Father Eugene Carrella