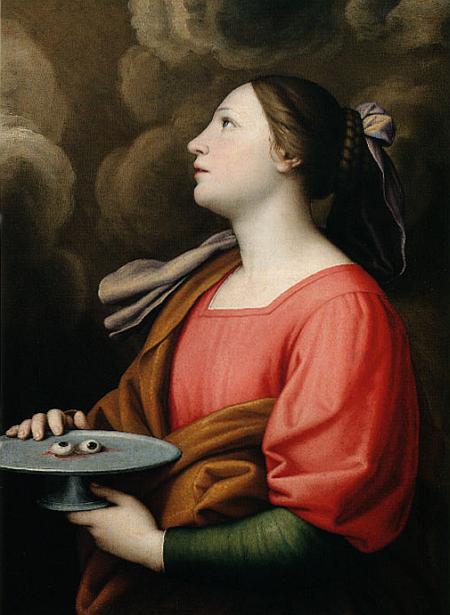 “Those who live chaste lives are temples of the holy spirit.”

Saint Lucy was a privileged young woman who chose a state of enlightenment over the prosperous, respectable life she was expected to lead in Roman society. One of the early virgin martyrs, her quiet but steadfast rebellion against the civil authorities earned her an excruciating death that became a triumphant example of everlasting life, hastening the overthrow of the Emperor and the legalization of Christianity.

Born in Siracusa, Sicily, Lucy was a young Christian  woman of Greek ancestry.  She held a deep spiritual belief that one must remain pure to be a true conduit of the Holy Spirit. Lucy secretly vowed to remain a virgin, even while her widowed mother arranged her marriage to a wealthy pagan nobleman. At this time in history, Christianity was looked upon as a threat by the Roman Emperor. So many soldiers in the Empire had converted, that officials feared they would follow the tenets of Christ over their military leaders. The state insisted that it was a man’s duty to serve his nation militarily and a woman’s duty to marry and bear children. When a girl refused to do this, she was considered a traitor to the empire. Therefore, consecrating one’s virginity to Christ, was more of a bold and revolutionary stance against the state than a  private act of devotion.

Lucy’s mother suffered ceaseless bleeding from a uterine hemorrhage.  Her daughter insisted they make a healing pilgrimage to the tomb of the virgin martyr Saint Agatha in Catania some 50 miles away. Agatha had become the patron of Catania after her veil stopped the deadly flow of Mount Etna’s lava from entering the town. She was credited with so many miracles since her martyrdom 35 years prior, that Christians, Jews and pagans alike were drawn to her tomb to invoke her aid. Lucy and her mother spent the night in prayer outside of the tomb. Agatha visited Lucy in a dream, telling her, “You have no need to invoke me, for your faith has already cured your mother. One day you will be known as the patron of your own city.” As the day dawned, Lucy found her mother completely healed. When she confessed  her secret vow of virginity, her mother agreed not to force her into marriage.

In 303 the Emperor Diocletian launched the most extensive and vicious anti-Christian campaign throughout the Roman Empire. This was the political atmosphere that Lucy and her mother returned home to. Since she was no longer in need of a dowry, Lucy encouraged her mother to divest herself of all the investments she had made for her daughter’s future and give the money to the poor. Lucy’s fiancé, outraged to learn that his engagement was broken, denounced her to the governor of Siracusa. Brought before this official, Lucy asked, “Why would that man want to marry me?” When the governor quipped, “Perhaps it is your lovely eyes,” Lucy ripped out her eyeballs and told him to send them to her former fiance. Her eyesight was miraculously restored the next day and the governor demanded why she so adamantly refused to marry. Lucy replied, “Those who live chaste lives are the temples of the Holy Spirit.”

The governor then told her that he would have her taken to a brothel and repeatedly raped until she “lost the Holy Spirit.” Soldiers came to carry her off but could not move her. A thousand men were called in, to no avail. Lucy would not budge. Nor could a team of oxen drag her away.  Burning pitch was poured on her skin but nothing would break her will. Upon predicting the fall of the Emperor, Lucy was fatally stabbed in the throat.  True to her prophecy, the Emperor fell within the year and Christianity was legalized in Rome under Constantine nine years later.

Immediately after her death, public opinion was so swayed by Lucy’s fate that it was considered a great honor for other Christians to be buried in the catacombs of Siracusa near her. In the sixth century, the Acts of the Virgin Martyrs were given great recognition by ecclesiastical writers and Lucy’s name was entered in the Canon of the Mass. In art, she is sometimes portrayed in the company of Saints Agatha, Agnes of Rome, Barbara, Thecla and Catherine of Alexandria. All of them, legendary young girls defiant and fearless in the face of death.

The people of her native city have always honored Lucy and been protective of her. In the ninth century when Siracusa fell into Muslim hands, they hid Lucy’s remains for hundreds of years until 1040 when the Byzantine army drove out the Saracens. In gratitude for their liberation, they sent their most precious possession, her body,  to Constantinople as a  gift for the Empress Theodora. Many of her relics were then distributed throughout Europe which greatly expanded the range of her cult.  In 1204, Venetian Crusaders conquered Constantinople and took Lucy’s remains back to Venice where they were installed in a church named for her. This original church was near the place where the gondolas were parked. The song “Santa Lucia” became famous among gondoliers looking forward to the end of their night’s work. When the church was torn down to make way for the new train station, the station was named for Saint Lucy and her remains were interred in the nearby Church of Saint Jeremiah.

The name “Lucy” means light. According to the Julian calendar, her feast day, December 13 was considered the shortest day of the year. Celebrations combining Lucy’s feast day with the winter solstice began in Sicily and spread throughout Europe. It was said that the “longest of nights and the shortest of days belong to Saint Lucy”. Today, she is most celebrated in Sweden and other Scandinavian nations because when the Swedes converted to Christianity in the 11th Century, they could most easily relate to a Saint who would gradually bring more light each day as the sun changed its course.  Saint Lucy’s day is a major holiday in that part of the world, celebrated with torchlight processions of crowned girls in white dresses. With the change to the Gregorian calendar in the 1300’s, and the shifting of the solstice to ten days later, Lucy’s feast became synonymous with the start of the Christmas season. She is associated with gifts to children because of her part in curing an eye epidemic that was blinding children in the 13th century. When local families went on a barefoot pilgrimage to her tomb invoking her aid, she sent them home, curing the children and telling them that they would find gifts in their shoes. It became a common Christmas custom in many parts of Europe to celebrate the saint’s feast by putting  gifts in children’s shoes. In 1582 Saint Lucy was credited with ending a famine in Sicily by sending three grain loaded ships to its starving residents. The people were so hungry that they boiled and ate the grain without grinding it into flour.  To this day, Sicilians do not eat anything made with flour on Saint Lucy’s day and there are a host of traditional foods and desserts created specifically for her feast day.

Lucy is a popular subject for artists, she is frequently depicted calmly holding her eyeballs on a dish, referencing her story. Because of this, she is the patron of the blind and all trades relating to the eyes. Eye strain is a common problem for writers, therefore she is their patron. Because of the success of her mother’s healing she is invoked against hemorrhage. Since she was stabbed in the throat she protects against throat ailments and cutlers because she was killed by a knife. As a true patron of her city, Syracuse, she was historically called upon to help in all epidemics, hence her aid against dysentery. Peasants claim her patronage because they depend on oxen who play a part in her story. Her final resting place is Venice so she is the patron of that city’s glassmakers and gondoliers.

Prayer to Saint Lucy of Syracuse

By the light of faith which God bestowed upon you,

Increase and preserve this light in my soul so that I may avoid evil,

Be zealous in the performance of good works,

and abhor nothing as much as the blindness and darkness of evil and sin.

By your intercession with God,

obtain for me perfect vision for my bodily eyes

and the salvation of all men.

Hear my prayers and obtain my petitions.

Say this novena times in a row for nine days in a row.

Excerpted from the book, “Saints:Ancient and Modern” by Barbara Calamari and Sandra DiPasqua

6 thoughts on “Novenas for December”