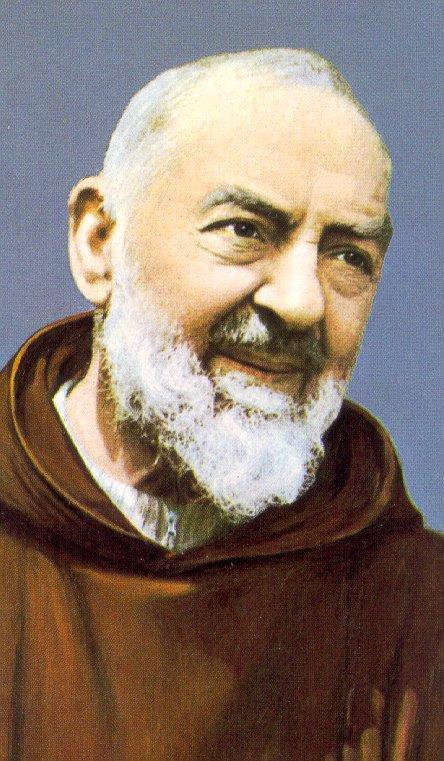 Invoked For: forgiveness,  healing of all kind

With these words Padre Pio was able to make people who never thought of spiritual matters, religious. He is known as the saint of the common people, always consoling, always accessible to those who visited or wrote to him  A mystic who could bilocate and read hearts, he had assured his fellow monks that he would become even more prevalent a force after his death. Today, millions of people a year flock to the little monastery he never left in order to be in his spiritual presence.

Named for Saint Francis of Assisi, Francesco Forgione was born in Pietrelcina, a small town north of Naples. As a child he experienced many spiritual visions of Christ and the Virgin Mary but never mentioned them to anyone as he thought all people had them. Coming from a devout Catholic family, he entered the novitiate of the Capuchin Friars, an austere division of the Franciscans. He took the name Pio (Pious) and was ordained in 1910. Diagnosed with a form of tuberculosis, he was sent back to live with his family. Since he could not fulfill his duties as a priest he decided to offer himself as a conduit of suffering in the exchange of the salvation of others. While praying in his family’s home, wounds appeared on his hands, feet and side, similar to those inflicted on Christ. Embarrassed, he begged God to take these marks away. His prayers were answered and he was later conscripted into the army in 1916. While there, he fell ill with a fever that rose higher everyday. It is recorded that it broke the thermometer,  rising to 118 degrees, far higher than what would be considered fatal. Sent home to die, he recovered and his Father Superior ordered him to the remote monastery of Our Lady of Grace in San Giovanni Rotondo, Puglia, a province of Southern Italy.

While praying alone in the intense stillness of the church on September 20, 1918, he went into a trance like state of “waking sleep”.  He saw Christ standing before him, bleeding from his wounds. Pio was intensely moved and thought his own chest would burst in sympathy, but as he came out of this altered state he experienced excruciating pain. He was inflicted with the same stigmata as Christ and a fellow brother had to lead him away and bandage him up. Though he did what he could to heal his wounds, they never closed up until his death 50 years later. There are other mystical saints who have experienced the stigmata, starting with Saint Francis himself, but Padre Pio became the first ordained priest to have this condition.

Since San Giovanni Rotondo is very near the Gargano shrine to Michael the Archangel, religious pilgrims began flocking to the monastery to hear Pio say mass. Wanting only to stay in the background and remain an anonymous friar, Pio suffered not only physical agony but psychological and spiritual pain as well. His life of constant prayer was greatly disturbed by the influx of curiosity seekers as well as those who considered him holy. Forced by his wounds to wear half gloves, many reported “the odor of sanctity” on his hands. His mysticism extended  to the confessional where penitents swore that Pio could read hearts. Many were sternly rebuked by him as he recited for them sins that they themselves had withheld or forgotten. After going to him for confession these same people reported feeling overwhelming joy and relief.

All great mystics write about a period in their lives when they feel spiritually abandoned and God seems distant and unavailable. Saint John of the Cross has called this time in one’s life “the dark night of the soul”. Pio’s trials began in 1920 when Pope Benedict XV opened an investigation into the causes of his stigmata. Concerned about Pio’s cult following, doctors and archbishops were dispatched to interview him. Accusations of fraud and clerical misconduct would follow Padre Pio for the rest of his life as the Vatican launched over 12 future investigations into his conduct. In 1922, under Pope Pius XI, a specialist on stigmatic causes declared Padre Pio to be an hysteric who kept his wounds open with carbolic acid.. Padre Pio was ordered into seclusion and forbidden to say mass in public. A massive demonstration of 5000 people erupted in the village when it was rumored that their beloved friar was going to be moved. The Vatican agreed to leave him in Our Lady of the Angels but issued a decree warning against devotion to the priest as Padre Pio’s gifts were not to be considered of supernatural character.

While in seclusion, Pio calmly accepted his situation, he would spend hours of the day engulfed in prayer. Padre Pio has said that at this time he realized his true vocation was to suffer for the souls in purgatory so that they may win early release.  Though it deeply pained him to be under such intense suspicion, he obeyed the church authorities with humility and considered this time in his life a necessity for purging further imperfection from his soul.

He never left his monastery at the same time people reported seeing him at the sick beds of hospital patrons hearing final confessions or comforting the fatally ill hundreds of miles away.  A fellow monk has written that he saw Pio shivering and murmuring in the middle of an intense heat wave. When he finally seemed to return to consciousness, the monk asked him where he was, “I was giving the last rites in the Alps,” he was told. “It’s very cold there.”

In 1933 he was granted the privilege of saying mass in public again, but only at 5:30 in the morning. The little church would be filled to overflowing at this hour, people would begin lining up in the middle of the night to attend. Pio ate little and slept only three hours a night. Over his lifetime he heard over a million confessions. Though he could be gruff and angry with penitents he had a devout following. He began a small local prayer group which has since spread worldwide with 400,000 members.

During World War II, he promised the citizens of San Giovanni Rotondo that he would see to it that their town would be safe. The Germans had stored a depot of ammunition near the town which the Allies attempted to bomb, more than one officer reported seeing a monk in the sky with uplifted hands. Their bombs had fallen out of the planes into the woods and their planes had reversed course by themselves.  American soldiers, hearing about this “living saint” made the difficult trip up into the mountains to see Padre Pio. They too experienced his abilities, many thought he knew English when they went to his confessions, he was so successful at impressing his advice on their minds. On their return home, they spread his cult to every part of the United States. By 1947 Padre Pio was receiving more than 200 letters a day requesting advice and prayers from the United States, Europe and Australia.

He used his growing popularity to found the House for the Relief of Suffering, a hospital for the hopelessly ill using only donations of the faithful. Today, it serves over 60,000 patients a year and is solely supported by charitable donations. Successful though he was, doubts about his real sanctity continued throughout his lifetime. Microphones were secretly planted in his confessional by Vatican investigators in attempts to find human flaws in his character. Though he never encouraged it, he developed a major cult following which was considered distracting and possibly dangerous by the Church.

He died as he predicted he would, in 1968. His fellow monks heard him declaring that he saw two mothers at his bedside, then he murmured, “Jesus, Mary” before expiring. Over 100,000 devotees attended his funeral. The suspicions that many in the Church held of Padre Pio were dissolved in 2002 when he was canonized by Pope John Paul II in front of half a million people. This pope knew first hand, the mystical abilities of this obscure monk as he had traveled to San Giovanni Rotondo in 1947 when he was only a seminarian. While in confession with Padre Pio, he was given the astounding prediction that he would someday be pope. Years later, when he was the bishop of Cracow he wrote to Pio requesting prayers for a friend with cancer. Ten days later she was healed.

. Today, a cathedral which holds 10,000 people at a time stands in the town where Padre Pio spent his life. San Giovanni Rotondo is second only to the shrine of Our Lady of Guadalupe for religious pilgrims. Like Saint Therese of Lisieux and his patron, Francis of Assisi, Padre Pio  does as much after his death as he did in life to bring grace and consolation to those in need.

As a contemporary saint, most images of Padre Pio are standard photographs. Because of his willingness to suffer like Christ, Padre Pio is usually depicted with a crucifix or with his stigmatized hands bandaged.

Oh Jesus, full of grace and charity, victim for sinners,

So impelled by your love of us that you willed to die on the cross,

I humbly entreat Thee to glorify in heaven and on earth,

the servant of God, Padre Pio of Pietrelcina,

Who generously participated in Your sufferings,

who loved Thee so much and who labored so faithfully

for the glory of Your heavenly Father and for the good of souls.

With confidence, I beseech Thee to grant me,

through his intercession, the grace of which I ardently desire.

Excerpted from the book “Saints: Ancient and Modern” by Barbara Calamari and Sandra DiPasqua