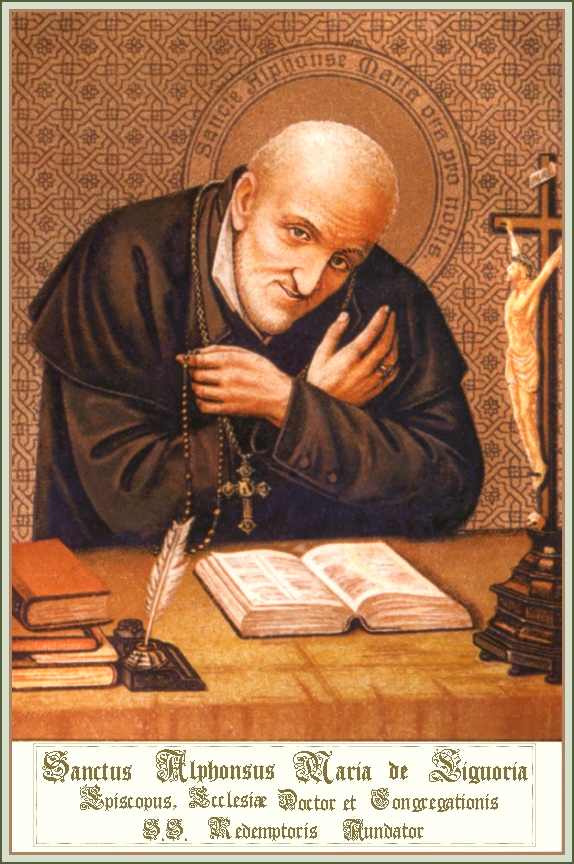 Crippled by arthritis and ready to die at age seventy-two, Saint Alphonsus Liguori went on to live another nineteen years, publishing over sixty books and writing poetry and music. His disease made him so conscious of his own mortality that he assumed each day was his last and lived accordingly. He is the patron of those suffering from arthritis and the pains of old age. He sets the example of turning suffering to an advantage. In his case, his ill health made him use his earthly time in the most efficient manner. Saint Alphonsus Liguori is most frequently invoked for a cure to illness, and if that is not possible, for a way to bear illness productively. It is also thought that those who suffer physical torments on earth and offer those pains as reparations for the sins of mankind have more intercessionary power after death than others. Because he spent so many years of his life in chronic pain, unable even to lift his chin off his chest, Saint Alphonsus is thought to be an extremely effective intercessionary force.

Born near Naples, Italy, in 1696, Alphonsus Liguori started out in life as a brilliant lawyer. A doctor of law by the age of sixteen, he practiced for eight years before losing his first case. He always attributed his success at law to his daily attendance of mass. His first loss in court – the result of an oversight on his part – came as a devastating blow to him. Humiliated, he fasted and prayed for three days. While doing charitable works in the Hospital for Incurables, he found himself surrounded by mysterious light. The building seemed to rock and an interior voice said, “Leave the world and give yourself to me.” This occurred twice. A few years later, in 1726, he was ordained a priest. He devoted himself to working in the poorest areas of Naples and developed a reputation as a popular preacher. Though a highly educated professional, able to argue the smallest nuance in law and theology, Saint Alphonsus said, “I have never preached a sermon that the poorest old woman in the congregation could not understand.”  His confessional was always crowded, and he is credited with healing a great number of hardened sinners. Saint Alphonsus founded the order of Redemptorist fathers, dedicated to going out among the poorest neighborhoods. He wanted his priests to preach practical sermons and act as missionaries, bringing the word of God to the forgotten. At the age of sixty-six, Saint Alphonsus was made the bishop of Saint Agata, a diocese of thirty thousand people. When ill health forced him to be bedridden, the pope refused to accept his resignation because he felt that the power of Alphonsus’ s prayers would help his constituents more than the actual good works of anyone else. Saint Alphonsus died in 1787 at the age of 91.

In art he is always depicted with his chin on his chest due to his arthritic condition.

He is the Patron of: Charity

He is Invoked against: Arthritis, the Pains of Old Age

His Feast Day is August 1

Glorious Saint Alphonsus, loving father of the poor and sick, all your life you devoted yourself with a charity really heroic to lightening their spiritual and bodily miseries. Full of confidence in your tender pity for the sick, since you yourself have patiently borne the cross of illness, I come to you for help in my present need.

Loving father of the suffering, Saint Alphonsus, whom I invoke as the Arthritis Saint, since you suffered from this disease in your lifetime, look with compassion upon me in my suffering. Beg god to give me good health. If it is not God’s will to cure me, then give me strength to bear my cross patiently and to offer my sufferings in union with my crucified Savior and his Mother of Sorrows, for the glory of God and the salvation of souls, in reparation for my sins and those of others, for the needs of this troubled world, and for the souls in purgatory.

(Recite one Our Father, one Hail Mary and one Glory Be).

Saint Alphonsus, patron of the sick, pray for me. Amen.

Excerpted from the book: “Novena: the Power of Prayer” by Barbara Calamari and Sandra DiPasqua.

3 thoughts on “Novena for August”