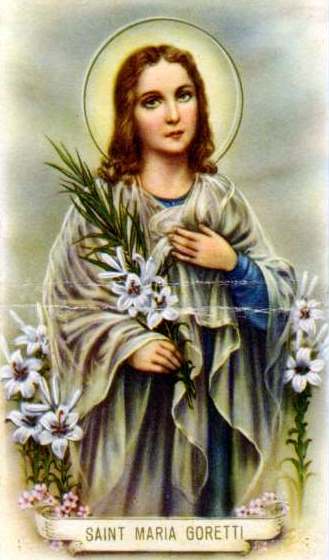 Because of her gentle nature, Saint Maria Goretti has been called the Saint Agnes of the twentieth century; but unlike the ancient girl martyrs before her, Maria Goretti was not a heroic victim of the state. Murdered for refusing to submit to rape, her tragic fate was transformed into a remarkable example of the healing power of forgiveness. It is the amazing work that she accomplished after her death that caused her to be canonized as a saint in 1950. Through her intercession, her unrepentant killer became living proof of the power of love and forgiveness to transform an individual. His visions of Maria offering him flowers so moved him that his testimony became crucial in her canonization. Saint Maria Goretti is the patroness of rape victims and young girls. She is called upon for comfort, strength and guidance. She is particularly sympathetic to the plight of young teenagers in the face of peer pressure. Her own story is an illustration of how great good can supplant evil.

Maria Goretti was born in Ancona, Italy, in 1890. She was the third of six children. Her family moved to Nettuno, where her father worked as a field hand. His death of malaria in 1900 left the family destitute, forcing his wife to take his place in the fields while Maria stayed home and cared for the younger children. Alessandro Serenelli, the twenty-year-old son of a neighboring farmer, began pestering Maria while her mother was away at work. Not wanting to cause trouble for his family, she rebuffed him as best she could, without telling anyone. On the evening of July 5, 1902, as she sat mending a shirt and minding her baby sister, Alessandro burst in and dragged Maria into the bedroom. She refused his sexual advances and he stabbed her fourteen times, leaving her for dead. She was found by family members and rushed to a hospital, where she clung to life for another twenty hours, during which time she expressed great concern for the plight of her mother and also for the soul of Alessandro Serenelli. She said that she fully forgave him and that she wanted him to be with her in paradise. Maria Goretti died immediately after making this statement. She was just eleven and a half years old. Unrepentant, Serenelli was convicted and sentenced to thirty years in prison. In the eight year of his incarceration he had a vision of Maria standing in a garden, dressed in white with an armful of lilies. Smiling at him lovingly, she beckoned him and encouraged him to take the flowers. As he accepted them, each lily transformed into a still, white flame. Stricken with remourse, Alessandro became totally devoted to the memory of the girl he had murdered. When he was released from prison in 1930, the first thing he did was beg Maria Goretti’s mother for forgiveness.

The story of Maria Goretti’s forgiving words became world famous. Soon after her death people began to pray to her for strength and guidance. Many, along with Serenelli, attested to her positive intervention. He cult became so popular that there were 250,00 people crowded into Vatican Square on the day of her canonization. Saint Maria Goretti is depicted with the martyr’s palms and her bouquet of lilies.

She is invoked against: Peer Pressure

Saint Maria Goretti, strengthened by God’s grace, you did not hesitate, even at the age of eleven, to sacrifice life itself to defend your virginal purity. Look graciously on the unhappy human race that has strayed far from the path of eternal salvation. Teach us all, and especially our youth, the courage and promptness that will help us avoid anything that could offend Jesus. Obtain for me a great horror of sin, so that I may live a holy life on earth and win eternal glory in heaven. Please intercede for me in obtaining the favor I now ask. Amen.

Excerpted from the book “Novena: The Power of Prayer” by Barbara Calamari and Sandra DiPasqua.