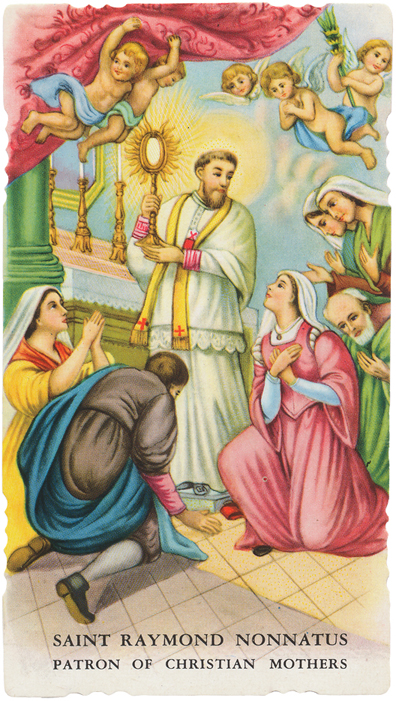 “For many hours you did not die in the womb of your dead mother and you were successfully delivered from her side to be the joy of the world.”

‘Non natus’ is Latin for “never born” and Saint Raymond was given his surname because his mother had died in labor two days before he was delivered by cesarean section. The fact that he did not die in his mother’s womb was considered an extraordinary event in the early thirteenth century, when a good number of mothers and infants were lost during childbirth. Because of the extraordinary circumstances of his birth, he always felt an affinity for the precarious state of women in labor and their infants. For this reason, midwives, obstetricians and expectant mothers call on him for help in the safe delivery of healthy newborns.
Hailing from Catalonia in Spain, Raymond’s family were from a noble class. His father attempted to train him to take over the family farms but because of his great devotion to the Virgin Mary, he chose instead to join the Mercedarians, a religious order dedicated to ransoming Christian slaves from the Moors, who occupied much of Spain. The Mercedarians also spiritually administered to Christian slaves in Moorish regions. As the Spanish territory was recaptured, and the Moors driven into North Africa, Raymond Nonnatus followed Christian slaves into Algeria. It was said he spent his entire inheritance ransoming slaves and when he ran out of money he substituted himself for another man’s freedom. He was soon imprisoned for his religious proselytizing and when he succeeded in converting several of his jailers, the Moors bored holes in his lips and sealed his mouth shut with an iron padlock to keep him from preaching. Though he was sentenced to death, the Mercedarians managed to ransom him home to Spain. As he was en route to Rome to receive the hat of a cardinal, he was struck down by a fever and died in Cardona, 60 miles from Barcelona. It was said that angels fed and administered communion to Raymond on his deathbed and he is frequently depicted in the company of angels.
Because of the padlock put on his lips, Raymond Nonnatus is invoked against gossip and the temptation to gossip. He is also invoked for help in keeping secrets as well as by priests for protection of keeping the sacred silence of the confessional. On the feast of Saint Raymond Nonnatus, it is customary for those who are victims of slander and gossip to put locks on the saint’s altar to silence their persecutors. In many images Saint Raymond Nonnatus carries the palm of martyrs signifying life defeating death, his palm has three crowns, for chastity, eloquence, and martyrdom.

Novena
Glorious St. Raymond, filled with compassion for those who invoke thee and with love for those who suffer heavily leaden with the weight of my troubles, I cast myself at thy feet and humbly beg of thee to take the present affair which I recommend to thee under thy special protection. ( your request here.)

Vouchsafe to recommend it to the Blessed Virgin Mary and lay it before the Throne of Jesus, so that He may bring it to a happy issue. Cease not to intercede for me until my request is granted. Above all obtain for me the grace of one day beholding my God face to Face, and with thee and Mary and the saints praising and blessing to all eternity. Amen.

Say one Our Father, Hail Mary and Glory be.

8 thoughts on “Feast of St.Raymond Nonnatus”