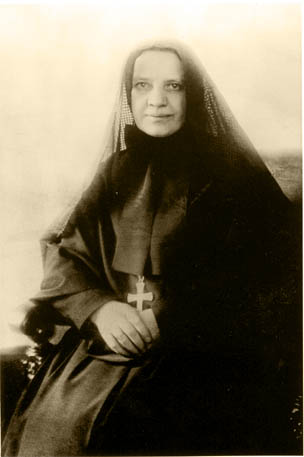 The miracles attributed to Mother Cabrini are ongoing. In the chapel that holds her remains in New York City, there is a constantly changing collection of plaques, gifts, thank-you cards, and written testimonials to answered prayers by those who have invoked her for help. She is the first American citizen ever to be named a saint, and there are three major shrines to her in the United States. Having lived among the world’s forgotten citizens and the working poor, she is especially known for her intercession in relieving the small everyday burdens and disappointments that can sometimes seem insurmountable.

She was born Maria Francesca Cabrini in the Lombard region of Italy. She lived on a farm, the youngest of thirteen children, only four of whom survived adolescence. When she was twenty years old, both her parents died in a smallpox epidemic. Due to her own ill health, she was turned down by two convents that she tried to join. Qualified as a schoolteacher, in 1880 she was sent to Codogno to run a small orphanage. There she founded the Missionary Sisters of the Sacred Heart, the first group of missionary nuns. She took the name Frances Xavier after her idol, Saint Francis Xavier, patron of the missions. It was her dream to continue his work in Asia by opening up a mission in China. After her orphanage was closed, she went to Rome and surprised many by having the rule of the order she founded authorized by the Pope in so little time. When he learned of her desire to be sent to China, he pointed out the unmet need in America, particularly New York City, where more than fifty thousand newly emigrated Italians lived in the filthy slums. With six nuns, Mother Cabrini arrived in America in 1889, only to be told by the archbishop of New York to go home. Instead, they moved into the Italian ghetto and opened an orphanage.  Within a few short years, Mother Cabrini’s order opened a multitude of orphanages, schools, hospitals, and nurse’s homes throughout the United States, Central America, Argentina, Brazil, France, Spain, England, and Italy, all catering to the displaced and destitute.

Mother Cabrini was gifted with an innate business sense which made her extremely successful at raising money. Thought of as a somewhat difficult personality, she was very tenacious. This is perhaps due to the nature of her ministry. She lived among the lost and abandoned and even administered to the most violent offenders in Sing-Sing prison. Her experiences with the diverse groups of people she came in contact with softened her nature. Her character mellowed and she became less narrow in her judgments. In 1909 she became an American citizen. Just as Mother Cabrini evolved as a person, she is evolving as a saint. Though she is the patroness of immigrants, orphans, displaced persons and hospital administrators, she is invoked for absolutely anything. Indeed, her popularity as an intercessionary force is growing. Mother Cabrini died of malaria on December 22, 1917, and was canonized by Pope Pius XII in 1946. Her body lies on view at the Saint Frances Cabrini Shrine in New York City.

Her Feast Day is the anniversary of her Beatification: November 13

O loving Savior, infinitely generous, seeking only our interest, from your Sacred Heart came these words of pleading love: “Come to me all you that labor and are burdened and I will refresh you.” Relying on this promise of your infinite charity, we come to you and in the lowliness of our hearts earnestly beg you to grant us the favor we ask in this novena, through the intercession of your faithful servant Saint Frances Xavier Cabrini, Amen.

Excerpted from the book, “Novena: The Power of Prayer” by Barbara Calamari and Sandra DiPasqua